Niliaitta is a black-painted cabin that Studio Puisto has elevated on a single column and hidden within woodland near the Salamajärvi National Park in Finland.

The cabin, which forms part of a new resort in Kivijärvi, is an interpretation of an ancient Niliaitta – an elevated wooden hut used by indigenous Samí people to safely store food outdoors.

Studio Puisto's goal is to pay homage to the history of Samí culture in the area while also creating a space that offers visitors a feeling of detachment from the outside world.

"The idea is that by simply retreating away up in the air, we feel immediately detached from our everyday worries happening on the ground," the Finnish firm explained.

"The contrast between the wild nature and a safe, cosy interior space is emphasised throughout, strongly guiding the overall experience."

The cabin is the first of 25 Niliaitta suites set to be built within the forest for the Kivijärvi Resort.

A further 25 rooms in a different design will also be built nearby, some of which will be positioned on the ground while others will float on a nearby lake alongside a sauna and conference centre.

As well as helping to create a feeling of isolation for visitors, elevating the Niliaitta on a single column also helped Studio Puisto to reduce the project's impact on the forest setting.

Similarly, its position and access point were chosen to minimise the number of trees that had to be removed during its construction.

"Even though the foundation of the pillar is massive, it allowed us the ability to restore the nature around the pillar to its original state," he told Dezeen.

Black-painted wood was used to clad the entire cabin to help it blend in with its surroundings, with the panels placed vertically to mirror the surrounding tree trunks.

It also complemented the cabin's adjoining long and linear staircase, which is designed as a continuation of the small narrow path that meanders through the forest floor to the cabin. 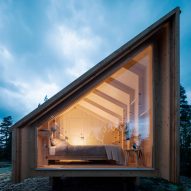 "Ascending into the cabin is an essential part of the overall experience; therefore, we wanted to amplify this with a long linear staircase," Jakonen explained.

"When arriving, you first approach the cabin after travelling down a narrow path deep through the forest – it takes you all the way to the first step of the staircase," he continued.

"It creates an experiential moment where the wild nature slowly transitions into a secure, safe place, offering an entirely different perspective through which to take in the nature around you."

Despite its remote setting, Studio Puisto's aim for Niliaitta was to incorporate the same facilities that might feature in a modern hotel room.

This means the cabin is fully linked to local sewage, water and electricity networks, using discreet building services hidden below the external staircase, and incorporates a spacious shower and a kitchenette.

Almost every surface is lined with light wooden panels, intended to retain focus on the unobstructed views of nature through the floor-to-ceiling window at one end of the cabin.

"The landscape that opens from this window intentionally dominates the rest, as the interior is done purposefully so that it would only serve as a neutral, blank canvas second to the nature outside," concluded the studio.

Studio Puisto is a Helsinki-based architecture studio that was founded in 2010 by Jakonen, Emma Johansson, Sampsa Palva, Heikki Riitahuhta and Willem van Bolderen. The studio also recently developed an adaptable, prefabricated cabin that is designed to be built anywhere for use as anything from a garden office to a remote off-grid retreat.

Elsewhere in Finland, it positioned a house clad in black-oiled wood on the border between a lake and a dense spruce forest.

Photography is by Marc Goodwin, Archmospheres.