A series of green public spaces will be landscaped around the Water Orton viaducts that Weston Williamson + Partners has designed in Warwickshire for the High Speed Two railway.

The viaducts, which will be built near the village of Water Orton, have been developed for a section of the high-speed railway that branches west towards Birmingham and north towards Crewe.

Weston Williamson + Partners' proposal is intended to have a low visual impact on existing rural landscapes in the area, with both concrete viaducts developed to be as slender as structurally possible.

There will also be large spans between their supporting piers, creating space at ground level for the landscaping of green public spaces including allotments and a "community-led orchard".

"Our approach at Water Orton has been to design structures which are in constant dialogue with the landscape, in parts screened and concealed by vegetation and elsewhere emerging into clearings, creating a bold and dramatic view," said Nick McGough, the studio's associate partner.

"The team has worked hard to elegantly sculpt these viaducts into the most narrow and slender structures possible, with large spans which reduce the number of piers," he explained.

"This minimises the locations where the structure touches the ground, improves the sustainability performance of the viaducts, and also creates opportunities for new green spaces and community amenities."

The pair of Water Orton viaducts through the Warwickshire countryside is required in order for the railway to safely continue over a network of existing roads and footpaths.

Weston Williamson + Partners' decision to prioritise landscaping in the designs was the result of public consultations, during which many local people requested that the project focused on enhancing the natural landscapes and preserving the agricultural character of the area. 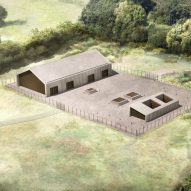 Alongside the green public spaces, a series of "wildlife habitats" including grasslands and areas for planting of native tree species will therefore also be introduced.

The slender design for the Water Orton viaducts is hoped to reduce shading over these areas.

"As we develop the detailed design for the railway, we are listening to feedback from communities like Water Orton, and also continue to work with them and local authorities to explore further opportunities for local connectivity through pedestrian access and cycling routes," said HS2's design director Kay Hughes.

"Our goal for the landscape design around Water Orton is to tie the proposed viaduct structures into the local landscape and create opportunities to enhance it."

The Y-shaped HS2 railway is being built to link up London, Birmingham, Manchester and Leeds with high-speed rail service and is expected to complete in phases between 2029 and 2035.

Weston Williamson + Partners' designs for the Water Orton viaducts, developed in collaboration with HS2's landscape architects and engineers from Systra and Mott MacDonald, is the latest in a string of designs revealed for the rail line in recent months.

This includes Grimshaw's proposals for two headhouses along the 10-mile-long tunnel through the Chilterns countryside. The Chalfont St Peter Ventilation Shaft is designed to resemble a barn, while the Amersham Vent Shaft will be enclosed by a decorative roof and curved weathered-steel wall.