Dezeen's founder and editor-in-chief Marcus Fairs moderated the live conversation, which is called Design in Process: Architecture, nature and technology.

He was joined by three participants in Dezeen and Dassault Systèmes' Design for Life video series, which highlights designers who are using technology and research to build a better world. 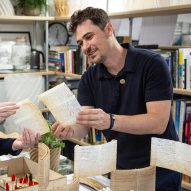 Mamou-Mani, Inglessis and Pawlyn discussed how technology can enable architects to create buildings that bring their inhabitants closer to nature, as well as how experimental projects can drive change in the wider design industry, and how the new accessibility of powerful design software is impacting architecture and sustainability.

French architect Mamou-Mani is the founder of his eponymous London-based architecture practice, known for experiments with alternative materials and methods of construction.

He has embarked on a sustainability-focused experimental collaboration with French design software brand Dassault Systèmes, which was explored in a video produced by Dezeen last year.

The project explores how architects can use recyclable materials and emergent technologies like 3D-printing to create architectural projects that contribute to a circular economy and minimise their impact on the environment.

He was also part of a panel on using post-plastic materials in architecture and design at the inaugural Dezeen Day and hosted a live virtual reality tour of his designs for the Burning Man Festival as part of Dezeen's Virtual Design Festival.

Greek engineer and designer Inglessis is the founder of Studio INI, an experimental design studio based between London and Athens, and the winner of the Dezeen Awards 2020 public vote for designer of the year.

In Inglessis' instalment of the Design for Life video series, she explained the way in which she uses technology to create intricate architectural installations that respond to the bodies of visitors.

Urban Imprint, an installation designed by Studio INI that appeared in 2019 at A/D/O in Brooklyn, featured a canopy that opens up around visitors' heads in reaction to the weight of their footsteps.

Studio INI contributed an installation named Disobedience to the London Design Biennale in 2018, in which visitors were invited to walk along a platform flanked by flexible walls that bulge open around them as they pass through the structure.

Pawlyn explained how biomimicry, the process of modelling a design based on processes found int he natural world, can allow architects to make a positive impact on the environment in an episode of the Design for Life video series.

Exploration Architecture is known for projects that demonstrate the potentials of biomimicry, including a seawater-cooled greenhouse modelled on a beetle that harvests its own fresh water in a desert, and a concept for an office building that mimics the structure of a spookfish's eye to help maximise natural light.

Pawlyn is also a key member of Architects Declare, a network of architectural practices committed to addressing the climate and biodiversity emergency.

Design For Life is a content collaboration between Dezeen and Dassault Systèmes featuring talks and videos highlighting designers who are using technology and research to build a better world.

The collaboration kicked off with a live talk with Mamou-Mani and Dassault Systèmes’ vice president of design experience Anne Asensio, in which the architect explained how he is collaborating with the brand to explore how 3D printing can be used to create sustainable structures using bioplastics.

This talk was produced by Dezeen for Dassault Systèmes as part of a partnership. Find out more about Dezeen partnership content here.
Read more: