In this video produced by Dezeen for the AHEAD awards, K-studio co-founder Dimitris Karampatakis and Dexamenes Seaside Hotel CEO Nikos Karaflos explain how they transformed an abandoned wine factory into a luxury resort with minimal intervention.

The project, which was developed by Athens architecture practice K-studio, was named Ultimate Winner of this year's AHEAD Global awards.

The AHEAD Global awards represent the finale of the programme of regional events in 2019 and 2020, in which the winners are pitted against each other to determine the best recently opened hotels worldwide.

Built in the early 1900s for the shipment of wine overseas, the pre-existing site where the Dexamenes Seaside Hotel now sits featured two concrete blocks divided lengthways into two rows of 10 storage tanks. 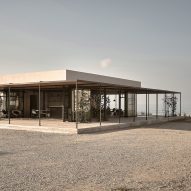 K-studio converted the tanks into ensuite bedrooms, with the external rows overlooking the beach and the internal rows facing a central courtyard.

"Dexamenes is a place of meaningful luxury," Karaflos told Dezeen in a remote interview conducted over Zoom.

"The brief was to maintain as much as possible for both sustainability reasons, but also out of respect of the history of the place."

In addition to retaining the original layout of the tanks, K-studio also preserved the two steel silos that occupy the central courtyard between the two blocks of tanks.

The circular structures, which are accessible via concrete stepping-stones, stand in a shallow pool of water and host art installations, spa treatments and private dining.

According to Karampatakis, working with an existing site provided an interesting design challenge.

"The building itself is quite unique because it was built for the scale of an industrial process," said the architect. "It was not designed with the human scale in mind."

The juxtaposition between the site's manmade structures and the natural beach was something the designers wanted to celebrate by way of a series of minimal interventions rather than an a complete overhaul.

"That contrast of a very heavy industrial-scale building on an idyllic beach is quite unique," said Karampatakis.

"We felt that our proposal should be more about preserving this character and feeling of being there, rather than introducing a new interpretation."

In addition to repurposing the building envelope, the interiors also feature a variety of materials reclaimed from the original structures.

"You'll find many elements such as coffee tables that are made of original blocks of concrete taken from the wine tanks, and reclaimed bricks made of clay that are now on the floor of the restaurant," said Karaflos.

According to Karaflos, Dexamenes Seaside Hotel caters to guests of the future, who will seek more immersive and authentic experiences after the coronavirus pandemic.

"The pandemic has changed a lot in the hospitality industry. Guests now are more conscious than ever before. They need to travel, they need to meet new places and their cultures," Karaflos explained.

"We are all desperate for extraordinary feelings. As we move forward from the restrictions of the global pandemic, I think that it is going to be quite interesting how a sense of place will be very high on the priorities as we move forward," added Karampatakis.