Chinese studio Open Architecture has designed a theatre and library at the Shanghai Qingpu Pinghe International School China within a blue-coloured building that resembles a whale.

Named the Pinghe Bibliotheater, the building was designed by Open Architecture to combine two theatres with a library in one structure that would be a visual marker for the international school in Shanghai.

"As the most important part of a high-density campus for a new K-12 school in Shanghai, the bibliotheater makes an unusual combination of two key components of teaching spaces, library and theatre, into one compact geometry," said Open Architecture co-founder Li Hu.

"It is a round-cornered triangle in plan, to relate to the urban intersection, and with a sloped cut on the top to minimize its impact facing the ancient moat," he told Dezeen.

According to the studio, the combination of its colour and form has lead to the Pinghe Bibliotheater becoming known as "the blue whale", something that they believe is fitting for the building

"We like the analogue of a blue whale, the largest mammal on earth, with mysterious things inside this body," said Open Architecture co-founder Huang Wenjing, who is a judge of this year's Dezeen Awards.

"I think blue was probably a decision with this giant mammal in mind," she told Dezeen. "You probably don't really know what's inside, from the appearance of its exterior, until you start to discover its surprisingly diverse spaces inside, its a building to be discovered and experienced."

Within the building, the functions were arranged logically depending on the amount of light and acoustic insulation they required.

The proscenium theatre and black box theatres were placed in the centre of the block on the ground floor and surrounded by the entrance atrium, a cafe, shop and the library.

The library has its main reading room on the building's upper floor lit from above by a large circular roof light.

Its other functions, including a stepped reading area and multimedia room and shelving for books, are wrapped around the central theatres, one of which is topped with a roof garden accessed from the library.

"The surprising combination of these two types of programs are not simply practical, but also metaphorical in its juxtaposition of light and dark, solitude and socializing, silence and sound," explained Huang. 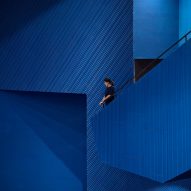 "The silent dialogues between the two bring surprises discoveries to the campus of learning, and city beyond, like a seed of culture."

The building was created as part of a school campus for 2,000 students aged from three to 18 years old. Open Architecture designed the campus "to break away from the current trend of school-as-megastructure" by creating numerous blocks including the Pinghe Bibliotheater.

Placed alongside a main road at the edge of the campus, the building is designed so that it can be used by the local community outside of school hours.

"The campus, or as we call it 'school as village', is an assemblage of buildings of distinctive forms and identity," said Li. "The bibliotheater is the head of this village."

Li and Huang established Open Architecture in 2003 in New York and opened a Beijing office in 2008. The studio recently completed the Pingshan Performing Arts Center near Shenzhen and has previously converted built a cave-like art gallery inside a sand dune in Qinhuangdao.

Photography is by Jonathan Leijonhufvud, unless stated.