Social media users have lined up to compare Amazon's future headquarters in Arlington, Virginia to ice cream, a Christmas tree and a cartoon turd.

Named The Helix and unveiled this week, the centrepiece of the Amazon HQ2 office complex designed by architect NBBJ will have a distinctive spiral shape.

"I was wondering how long it would be before we saw a building inspired by the poop emoji – and lo, Amazon has delivered," wrote Guardian architecture and design critic Olly Wainwright on Twitter.

Vox senior reporter Rani Molla wrote: "I mean I like it but also 💩." This was followed by an image of the proposed building with the poop emoji's eyes photoshopped on along with the caption "you're welcome".

As well as a turd, CNN technology reporter Brian Fung saw a resemblance to a drill bit and soft-serve ice cream.

"I've now seen people describe Amazon's forthcoming Arlington HQ tower as an upside-down drill bit, the top half of an ice-cream cone and a poop emoji," he tweeted.

Others compared the building to a Christmas tree, the Community of Christ Temple in Independence, Missouri and the Tower of Babel.

"Hope I don't get in trouble for this lol," he tweeted alongside a picture of an electric whisk, the Depot Boijmans Van Beuningen and Amazon HQ2.

"Made you a weird gift," tweeted writer Will Jennings in reply with a photoshopped image of the two buildings combined. 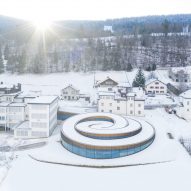 Amazon HQ2 is set to be built in Virginia following a nationwide contest to attract the retailer to cities across the US. It is being designed by international studio NBBJ, which also designed the company's dome-shaped Seattle headquarters.

Other buildings that are shaped like spirals include a museum for watchmaker Audemars Piguet in the Swiss mountains designed by Danish architecture studio BIG. As with the Amazon building, visitors can walk up this roof.

In Denmark, architecture studio EFFEKT created a helical tower for visitors to climb up above the treetops, while Tadao Ando's He Art Museum in China will also have a spiral form.