Located on a street corner in Hong Kong's Sai Ying Pun district, the 30-square-metre cafe sits at the bottom of an old apartment building.

It has a generous facade and a tight, triangular plan into which the architects have managed to squeeze a compact kitchen and bar area with a serving counter, as well as an area of bench seating and two toilets.

Called Today is Long, the cafe is owned by a barista and a public-relations manager, who bonded over their shared love of coffee and the fact they'd both spent time studying and working in Australia.

"The cafe is a place to house their fond memories of Australia and the good coffee that makes their life," explained Etain Ho, who also runs Absence from Island alongside its founder Chi Chun Tang.

"They would very much like to share the coffee with local residents and to make the cafe into a social hub." 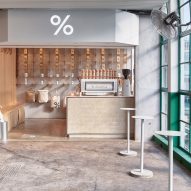 The owners' love for Australia has been translated into the design in the form a warm orange palette informed by the colours of dusk and the country's famous natural landmark Uluru, also known as Ayers Rock, which is a sandstone monolith in the Northern Territory.

As well as the colour scheme, the hemispherical shape of a setting sun has been incorporated into the cafe's walls and windows,  forming a distinctive geometrical facade that distinguishes the cafe from its grey concrete surroundings.

One of the semi-circular windows is recessed above the cafe's entrance, creating a sheltered, terracotta-coloured tunnel for housing potted plants.

A similar shape is carved into the wall below the take-away counter window and rotated sideways to create the rounded rectangle that acts as Today is Long's largest window.

A strip of fired ceramic tiles that recall the texture of Uluru's sunbaked sandstone wraps the lower portion of the cafe's exterior, extending the warm orange colour scheme to the street.

Inside, the generous windows, white walls and terrazzo floor create a light and open space. A corner of casual, stepped bench seating topped with terracotta tiles is dotted with potted plants and framed by a semi-circular mural.

"Australia has always been blessed with abundant amounts of sunlight, so a lot of white has been used together with the large windows to enhance the bright and airy atmosphere," explained Etain Ho.

"Spaces have been reserved under the entrance arch, seating area and the overhead storage for plants in order to create a green, lush and natural environment. Coffee grains used in the cafe will also be recycled as fertiliser for the plants."

Studio Etain Ho and Absence from Island are not the first design studio to use sunset colours to brighten up a grey urban context.

All photography is by Fo Visuals unless otherwise stated.