Architecture studio Atelier Aconcept has created a concrete gym for a kickboxing club in the town of Savigny-le-Temple, France, with an aesthetic designed to reflect the activity taking place within.

Built alongside the Château de la Grange-la-Prévôté park in Savigny-le-Temple, Atelier Aconcept designed the kickboxing and boxing club to have a simple and raw aesthetic.

"Using a minimal vocabulary of form, we wanted to make a simple and functional project," said Frédéric Quevillon, founder of Atelier Aconcept.

"Boxing and the harshness it can represent led us to imagine a raw building, from its envelope to the finishing details, really simple and clean," he told Dezeen.

The gym is made from three interconnected rectangular concrete volumes that are offset from each other. 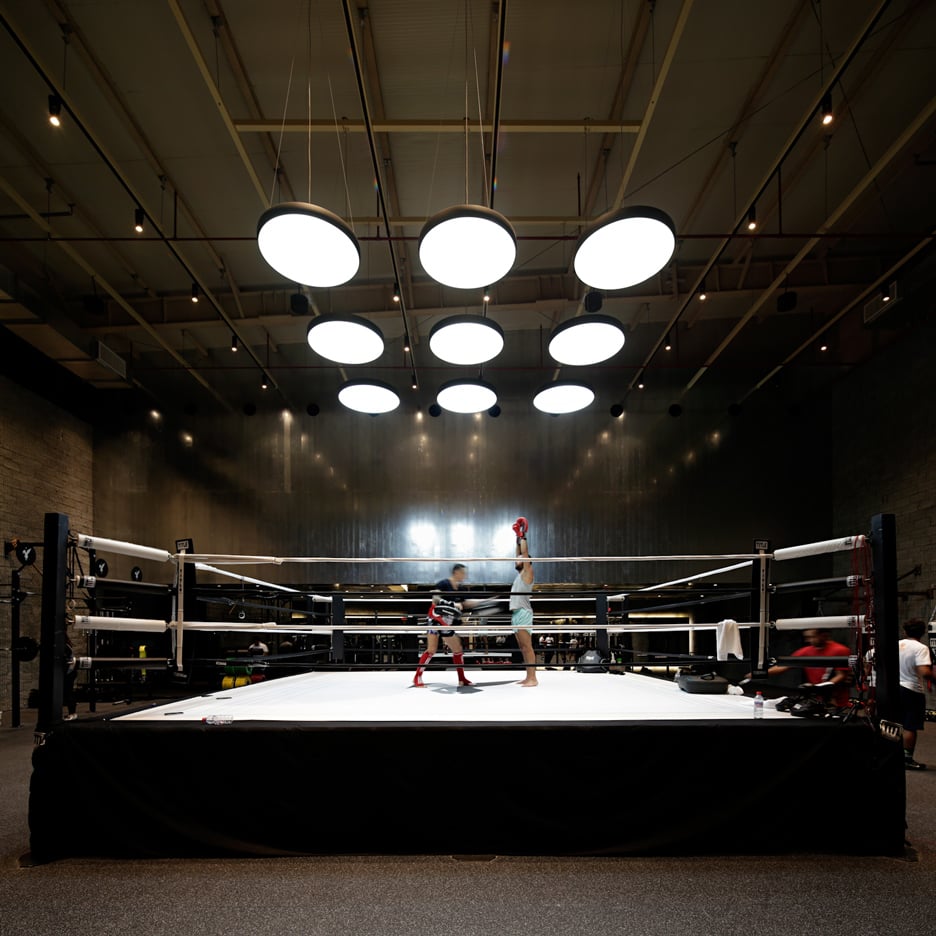 Alongside the road, the first block contains the building's entrance, changing rooms, toilets, first aid room and a large open gym space with a punching bag area and a space for cross training.

This open exercise space extends into the second volume that contains a sparring area floored with tatami mats.

In the final volume, at the end of the training hall, are the two fight rings – a square one for boxing and an octagon for kickboxing.

Each of the concrete forms is fronted with full-height windows, to allow passers-by to see into the club and for the club's members to see the surrounding woodland of the Château de la Grange-la-Prévôté park.

"The overall concept for the project was to incite the athletes to go outdoors," Quevillon explained.

"We wanted to create a real link between indoors and outdoors and to blur these lines, which is especially relevant with to the particular context we are facing since the health crisis."

Overall, Quevillon hopes that the building allows the boxing club to take advantage of the woodland location.

"The differential axis of the building is based on the context to which it takes part, and the link it creates with," he said. "The visual perception is focused on wood, concrete and nature."

Other boxing gyms on Dezeen include a community centre designed by London architecture studio Featherstone Young to replace the home of the Dale Youth Amateur Boxing Club that was lost in the Grenfell Tower fire.

In Kuwait, Lab100 Design Studio renovated a boxing club with a nod towards retro gyms.