The Red Sea Project has revealed images of a resort designed by Foster + Partners to "blend in with the natural environment" of a Saudi Arabian island within the Red Sea.

Coral Bloom will be made up of 11 hotels on the dolphin-shaped island of Shurayrah, which is part of a chain of 90 undeveloped islands off the west coast of Saudi Arabia that are being developed as part of The Red Sea Project.

Informed by the forms of native Saudi Arabian flowers and coral, the resort was designed to be a hub for the wider development and one of the first places that tourists visiting the development will see.

"The Coral Bloom concept, designed by lead architects Foster + Partners, will blend in with the natural environment and create a luxury experience for guests on their first arrival to the destination," said the project's developer, The Red Sea Development Company (TRSDC).

The development of the island will see it relandscaped to create a series of lagoons and beaches. Within the sand dunes alongside these beaches, 11 resorts will be created, each with numerous coral-informed villas.

"Our vision for Shurayrah is inspired by the island's natural state, with the hotels designed to give the impression that they have washed up on the beaches and nestled among the dunes almost like driftwood," said Gerard Evenden, head of studio at Foster + Partners.

"The materials we use and the low impact they have ensures that the pristine environment is protected, while the additions we make to the island serve to enhance what is already there – hence the name, Coral Bloom."

While having a shared overall design, the Coral Bloom resorts will each have distinctly designed villas. According to Foster + Partners, they will aim to cater to a variety of different tourists, from honeymooners to families. 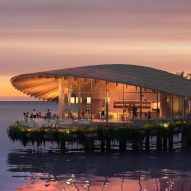 "It is dealt with as a single entity with 11 hotels on it," explained Evenden. "But what we wanted to do was to try to pitch the hotels so that the hotels appeal to different people at different times of their lives."

Each of the villas will be built using lightweight materials and manufactured offsite before being assembled on the island.

Shurayrah is one of 22 islands being developed as part of The Red Sea Project, which aims to have its first hotels open in 2022. The development also includes the construction of an international airport on the mainland nearby that is also designed by Foster + Partners.

The "mirage-inspired" international airport was criticised by the Architects Climate Action Network for going against the ideals of the climate change action group Architects Declare, which Foster + Partners was one of the founding signatories of. Following this criticism the studio withdrew from Architects Declare, stating that aviation needs "the most sustainable buildings".

When The Red Sea Project completes it will contain  50 resorts with a total of 8,000 hotel rooms and 1,300 residential properties 2030. This includes 100 villas being designed by Kengo Kuma on Ummahat Al Shaykh Island.