Dezeen founder and editor-in-chief Marcus Fairs was named specialist editor of the year at the BSME's 2020 awards, which were announced on 11 February 2021 after being delayed by the coronavirus pandemic.

"Always at the top of their game, this brand continues to evolve, innovate and find new ways to engage its audience," said the judges.

"This magazine made a positive of the lockdown, with a new initiative that chimed with readers and produced tangible results," judges said.

The double victory follows on from six awards Dezeen won in 2020, which contributed to Dezeen's most successful year ever, which saw record web traffic and social media growth.

Three of the awards were for Virtual Design Festival, with our Dezeen Day conference scooping another and founder Marcus Fairs winning the digital leadership prize at IBP's annual journalism awards ceremony.

Dezeen has a strong track record of wins at the BSME Awards, which are considered the most prestigious prizes for British editors. 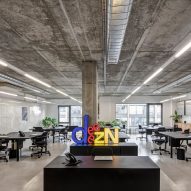 Fairs was previously named digital editor of the year in 2018, while the Dezeen Hot List was named best digital content idea at the 2017 awards.

In addition, Fairs won the BSME's Brand Building Initiative of the Year award in 2005 for the Icon Design Trail, which he created while editor of Icon magazine. This means he has won BSME awards five times in total.