The 50 Hudson Yards supertall skyscraper designed by architecture studio Foster + Partners has reached its full height in New York as Facebook plans to move in.

Under construction as part of the Hudson Yards development in west Manhatten, the 58-storey skyscraper will contain offices when it completes.

The final beam on the 1,011-foot-tall (308 metres) building was hoisted into position on 12 February 2021 marking the skyscraper reaching its full height.

The office tower designed by UK studio Foster + Partners is formed of three stepped-back volumes. It has a concrete core and will be clad in glass.

50 Hudson Yards was the second construction project in the USA to use a Self Climbing Cocoon by engineering firm Despe.

This system of steel mesh on hydraulics forms a moveable protective cage and walkway that moves up and down the building as workers erect structural steel around a concrete core.

Technology company Facebook is due to set up offices in 50 Hudson Yards when it completes in 2022, along with investment company BlackRock. 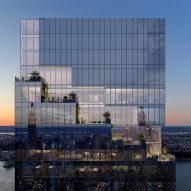 "The topping out of 50 Hudson Yards, on schedule despite a global pandemic, underscores the incredible construction team who remained committed to robust safety precautions as they redefined the city skyline," said Related Companies president Bruce A Beal Jr.

"New York City has long been one of the world's centres of innovation and commerce and we know this city’s best days are still ahead, fueled by a new generation of modern office space that will continue to attract the best companies and talent."

When 50 Hudson's Yard was announced in 2016 in was one of the key elements of the Hudson Yards masterplan, a scheme to regenerate a neighbourhood in west Manhattan.

"50 Hudson Yards is a key part of a larger vision that integrates places to live and work within a dense, walkable urban neighbourhood," Foster said at the time.

Since then many of the plans have come to fruition, with the High Line elevated parkway by Diller Scofidio + Renfro and James Corner Field Operations proving a popular attraction. 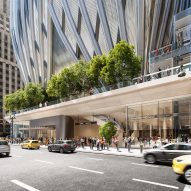 The Shed by Diller Scofidio + Renfro has also completed, along with Vessel by Heatherwick Studio and a supertall skyscraper by KPF.

Earlier this year The Spiral, a 314-metre-high supertall skyscraper designed by BIG also topped out in the neighbourhood.