Amsterdam-based UNStudio has unveiled its Van B residential building in Munich, which will have plug-in furniture modules so that its apartments can be reconfigured.

The six-storey building, which the studio has deemed a prototype for modern city dwelling, will be located on Infanteriestrasse near Munich's Creative Quarter.

Described as "analogue smart", the block will contain 142 apartments with shared communal spaces.

UNStudio designed the apartments to be reconfigurable in order to maximise their internal floor space and adaptability. They will be divided up with "plug-in" furniture units that function as space partitions.

"This is not smart in the usual sense of tech integration," said UNstudio founder Ben van Berkel.

"It instead involves reinterpreting ideas from the digital world in order to improve the analogue, physical spaces we inhabit."

Different units will host a variety of modules, including ones with storage, workspace, a gym, a lounge and a bed.

Developed using a grid system, the design will allow residents to easily move and reconfigure the space when needed, as families get bigger or smaller or new people move into an apartment.

All modules work together and can be slid out of the way when not needed.

"The flexibility lies in the fact that each element can work in different configurations and that the resident can choose an individual configuration of plugins based on a catalogue of nine elements," the studio explained.

This design aims to challenge traditional ideas of a home's footprint and makes it possible to transform a living space into a bedroom or a large office by using the partitions.

"We started to ask ourselves how we could maximise the space and make it as flexible and multifunctional as possible," Van Berkel told Dezeen.

The building's exterior nods to the interior module design, with protruding windows that create a sculptural, three-dimensional shell while metal and concrete provide material contrasts.

"The colourful and precisely cut metal surfaces on the exterior create a distinct contrast to the monolithic and rough surface of the concrete," Van Berkel said.

"This contrast helps to create a strong identity for the building on this corner location."

The 15,945-square-metre building is currently under construction and will have apartments, gallery lofts and rooftop flats sized from one to three bedrooms.

It was built to Germany's sustainability regulations and reused parts of the foundation and basement structure from a previous building on the site to save on construction materials and speed up the building process.

Creating a connection with the outdoors was an essential part of the design, with outdoor spaces designed to be an extension of the living space.

Large bay windows and balconies create visual connections between the tree-lined streets and the interior.

On the ground floor are triple-height apartments that have their own address, which the studio describes as "small houses nestled within the building."

These also have a glazed facade facing the ground-floor courtyards to encourage residents to extend their living spaces through to the gardens.

A shared roof terrace, which helps to cool the building, communal kitchen lounges, and entertaining spaces reinforce the idea of inclusive and community living that was intrinsic to the design.

"Architecture can create frameworks that enable people to meet, where neighbourhood communities can be shaped and where spontaneous encounters can occur," Van Berkel said.

The studio described the Van B building as an attempt to formulate a response to the housing crises, and hopes that the design can be altered, scaled-up and expanded upon for other cities.

"By offering a variety of new ideas and concepts, Van B becomes part of the necessary discourse about densification in Munich, as it offers an alternative means for horizontal, rather than vertical, expansion," UNStudio said. 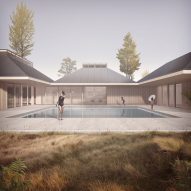 Dezeen has covered several other projects by UNStudio, including their works with the Qatar Rail Architecture Department to create stations for the driverless Doha Metro system and also the renovation and recladding of a fully occupied office tower in Seoul.