The Red Sea Project has revealed images of a Foster + Partners-designed hotel, which is set to be built on a Saudi Arabian island within the Red Sea.

The project will see an archipelago of 90 undeveloped islands between the cities of Umluj and Al Wajh on the west coast of Saudi Arabia turned into what the developers are billing as the "world's most ambitious tourism development".

As part of the development Foster + Partners has designed one of two hotels planned for Ummahat AlShaykh island.

Although few details of the final design have been released, visualisations show a series of timber-roofed holiday homes, restaurants and seating areas spread across the island.

The hotel will also include a series of suites supported on stilts above the Red Sea that will be accessed by a circular walkway.

Foster + Partners aimed to design the hotel with a "light touch, non-damaging approach". 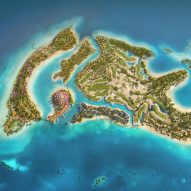 "It is about constructing more of the environment and about building on what was there long term as opposed to destruction," he continued.

"It was the light touch, non-damaging approach, and that has led through the whole of the design from beginning to end, and that is what we continue to strive towards."

The Red Sea Project is aiming to be "100 per cent carbon neutral". It will be entirely powered by renewable energy, with the developers banning single-use plastic and aiming to have no waste from the hotels going to landfill.

"What is very important about anything sustainable is two things: one is giving people choices," said Evenden.

"And the second thing is looking at what the resultant reaction of what you do will be. So, when we looked at the islands our approach was to have a light touch. As light as we could possibly be."

The other hotel on Ummahat AlShaykh is being designed by Kengo Kuma and Associates.

As part of the development, Foster + Partners is also developing the dolphin-shaped island of Shurayrah into a holiday resort named Coral Bloom.