Alexander Owen Architecture has added a marble-clad extension and garden room to this Victorian mid-terrace in East Dulwich, London, to accommodate a home office and a well-stocked bar.

The owners, a couple with three young sons, wanted a place to entertain and ample space to spend time together as a family.

In response to the brief, the architects created a single-storey rear extension that adds 13.3 square metres and accommodates an open-plan kitchen, utility room and toilet, plus a 16-square-metre annexe that serves as a work and social space.

Separated by a paved garden, the facade of the extension and garden room are clad in two types of precision-cut marble – a lighter version with hazier veining called Arabescato and a dark grey Bardiglio marble with a more structured finish.

"We wanted to create a holistic flow to the house and garden and a certain mimicry between the extension and garden room as new interventions," Richard Bridges and James Webster, founders of Alexander Owen Architecture, told Dezeen.

"The marble cladding on the extension and garden room has been designed to have similar cut lines and panel formations but the arrangement of the two marble types is reversed."

The marble has been mitred around the doors and windows and digitally cut to create precise, 90-degree junctions between the individual slabs. This allows the cladding and the cut lines to seamlessly wrap themselves around the glazing frames.

"The wider site context provides an abundance of trees and greenery, which as the day progresses cast an ever-changing array of light and shadow across the site," said the architects, who both previously worked at Foster + Partners.

"The final selection of marble was informed by this layering of dappled light on top of the veining, colouration and movement inherent to each type."

A set of sliding doors with Accoya wood frames opens the kitchen and dining space up to the outside, while the garden room is glazed with a set of bi-folding windows and a pivoting door.

"Each material was selected based on how it would sit against the other materials and its ability to sit in an almost 'raw' state – the very engineered precision and sheen of the stainless steel and geometric texture of the pewter blocks versus the natural, organic strength of the marble and warmth of the timber," Bridges and Webster explained.

"The palette tries to create a very calming balance between the organic and the engineered." 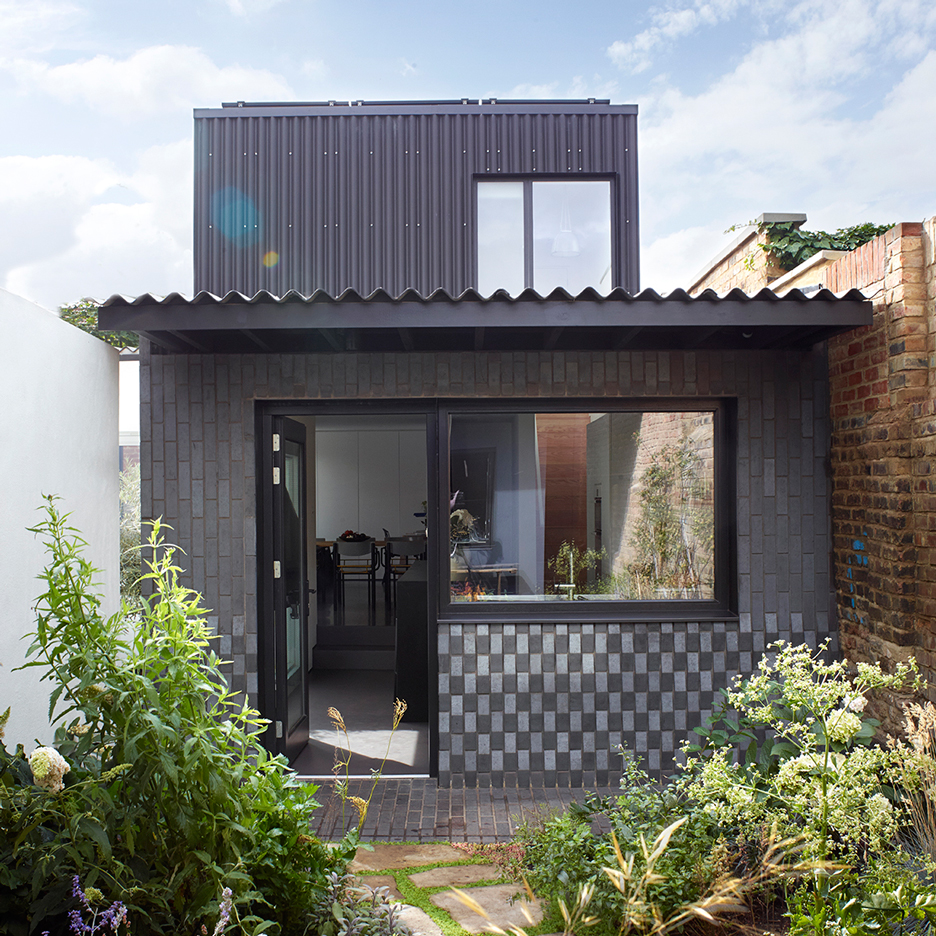 The steel island unit also incorporates a bench seat for the dining area while a linear skylight lets in sunshine from above.

The same black, wire-cut bricks that pave the garden are used on the floor of the annexe to create a seamless connection between indoors and outdoors. In the garden room, walls are clad in yellow Valchromat MDF and birch ply, as are the built-in desk, bar and storage cupboards.

According to the architects, who established their studio in 2013, the home's layout is carefully divided into various zones tailored to the family's daily routine.

The utility room and toilet are located in the mid-section of the property so that the kitchen and garden room at the back can function as a peaceful, "grown-up" area that can be kept tidy for dinners with friends.

"The rest of the house can effectively be shut off, with the utility space playing a key role in storage," said Bridges and Webster. "The family snug in the front part of the house means the owners can read books and listen to music on their record player while their children can watch TV or play in the other end of the space."

The garden room serves as a home office during the week and helps the couple maintain a boundary between work and family life. It also has an expansive bar that can be used for small gatherings.

According to Alexander Owen Architecture, there has been a marked increase in clients wanting to create an office space in their home.

"We have had a lot of interest in garden rooms since the start of the pandemic, with some new clients even prioritising this ahead of developing the main house due to the need for home working, schooling and simply more space," explained the architects.

"It's undeniable the impact that the last 12 months have had, not only on how much time we spend in our homes but on how we use them as live-work accommodation."

Covid-19 has forced companies around the world to embrace remote working, with many predicting that working from home will be here to stay long after the virus has been brought under control. Last month Dezeen rounded up 10 products to improve your home-office setup.