Israeli designer Erez Nevi Pana used five tons of salt from the Dead Sea to create his Crystalline collection, which showcases how the material can be used as building blocks.

The collection consists of four sculptural elements: a ladder, boulder, steps and a walkway, and is on view at the National Gallery of Victoria (NGV) Triennial in Melbourne.

Nevi Pana, who describes the pieces as "small-scale architecture", said they represent a journey from water to land.

The designer aims to eventually use salt from the Dead Sea and other saltwater bodies as a sustainable construction material for buildings.

All of the Crystalline designs are made from solid salt, apart from the ladder, which has an aluminium base.

Nevi Pana used more than five tons of salt to create the pieces, which aim to draw attention to the amount of salt left over in evaporation ponds.

"It was essential to present a product that benefits from the use of a large quantity of salt; in order to direct the discussion to the enormous amount of salt, neglected each year in the evaporation ponds," he told Dezeen.

"With Crystalline, the goal is to create an element that looks stable and firm, yet poetic and expressive by using a mass of salt with a definite shape."

To make the Crystalline collection, Nevi Pana first extracted the raw material from the Dead Sea.

He then proceeded to treat the raw material in different ways to create the final shapes of the salt. One part was kept in a raw, unfinished state, while another was CNC-milled to form steps.

Nevi Pana also used a compression-and-heating process, which the designer first developed when he was studying at the Design Academy Eindhoven, to create nine 'molten' salt blocks with an almost marble-like texture.

"It was extremely interesting to revisit this process and grow in scale towards the biggest elements I’ve ever produced with a mass of pure salt," he explained.

For the final part of the installation, the designer submerged some of the blocks that he had created back into the Dead Sea evaporation ponds, where the natural crystallisation process added more organic salt layers on top of the rigid shapes. 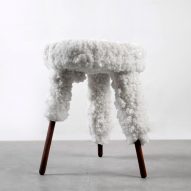 Eventually, Nevi Pana hopes we will be able to use the salt blocks, which he says have a high degree of strength relative to their size and mass, for buildings.

"The thicker the block, the stronger it is – which is consistent with the need to use the salt generated and neglected in the evaporation ponds," he said. "Thanks to the wide variety of shapes possible, they allow formal freedom for architectural creation."

"Due to the continuous casting, these blocks are also good as a bearing wall, the weight depends on the thickness of the block."

Using a locally sourced material such as salt is a sustainable building solution, he argued, and could be an effective way of managing the existing waste from the Dead Sea's potassium and bromine industries.

"The blocks are intended for arid areas, and exhibits a magnificent thermal insulation capability," he explained. "Applying an impervious layer over the surface is also possible, and helps these products withstand rain."

He believes this could also be a way of using the brine that is a byproduct of desalination plants, which are becoming increasingly common as water becomes scarcer.

"In environments where the abundance of salt is present, there is no logic in importing sand from disappearing beaches," Nevi Pana said. "I can imagine salt cities being built right there – white, glossy natural structures emerging."

"They can be temporal structures that materialise forward-thinking concepts on the way we build and the way we live in a world that changes so rapidly."

Photography is by Dor Kedmi unless stated otherwise.

Crystalline is on view at NGV International in Melbourne from 19 December 2020 to 18 April 2021. See Dezeen Events Guide for an up-to-date list of architecture and design events taking place around the world.