Two out of five BAME interior designers have faced discrimination at work due to their ethnicity, according to a diversity survey by the British Institute of Interior Design.

Forty-two per cent of the 109 respondents who identified as Asian, black, mixed or other said they had been a victim of discrimination in their profession or workplace because of their race or ethnicity.

Just over 60 per cent also believe that their race or ethnicity has hindered their advancement in the industry.

"It is clear that racism has been a factor that has held back the career progression of ethnic minority designers," BIID chief operating office Katherine Elworthy told Dezeen.

The results found that 46 per cent of black, Asian and minority ethnic (BAME) interior designers are the only person of colour in their workplace.

White designers, on the other hand, are disproportionally represented in leadership roles.

Although they made up only 69 per cent of all 363 survey respondents, white designers accounted for 78 per cent of those in high-level positions.

A total of 363 interior designers responded to the diversity survey. Overall, 37 per cent of respondents believed that they had been the victim of discrimination.

Along with discrimination based on ethnicity the survey also identified that 18 per cent of designers believe they had been discriminated against because of their gender.

The vast majority of these were women with 63 out of the 298 female respondents saying they had experienced discrimination.

The survey also revealed that 10 per cent of respondents had been discriminated against because of their age.

In addition to the survey, BIID analysed data from the Higher Education Statistics Agency (HESA) on how different minority groups were represented among interior design students and recent graduates over the last five years.

This showed that while interior design students are more likely to be from BAME backgrounds than the average UK student, a quarter of them end up having to take on low-skilled, non-industry jobs after university compared to 19 per cent of white students.

This is a higher percentage than the average BAME student who studied a different subject, which BIID concluded: "suggests there may be particular difficulties for ethnic minorities who have interior design degrees".

"We also know from government statistics there is a correlation between being a member of some ethnic minority groups and being in the bottom income quintiles," Elworthy explained.

"If unpaid internships are still one of the routes into the profession then this, of course, may disadvantage designers who come from lower-income households."

HESA data further showed that there is an "attainment gap" at university, with only 13 per cent of BAME students receiving a first-class degree compared to 28 per cent of white students.

"Whilst we are encouraged by high numbers of students choosing to study interior design, we need to explore how we can support the career progression of those students from ethnic minorities who may not be getting the opportunities to progress once qualified," Elworthy concluded.

"We feel that a multi-faceted approach is the best way forward. Our recently formed Diversity and Inclusion Committee is looking at how we can help support change within design practices, including recruitment, internships and opportunities for promotion," she added. 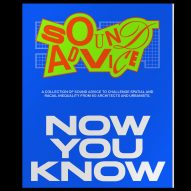 "We are also looking at how we can work with partners in the wider industry, such as universities, colleges, trade shows, awards schemes, suppliers and other industry initiatives to make sure our industry is diverse and inclusive."

The survey, which received responses both from BIID members and non-members, was conducted anonymously. "This does mean that we were unable to verify the identity of respondents," BIID said.

"We must also emphasise that given that this survey was entirely voluntary and based on a small self-selecting sample size, it cannot necessarily be used to extrapolate for the entire UK interior design profession."

In a separate effort to increase the diversity of the interior design sector, Sophie Ashby and Alexandria Dauley set up the United in Design initiative earlier this year.

The project outlines seven concrete steps that interior design studios can take to improve their diversity.