Built ahead of the postponed Tokyo Olympics, the toilet replaces an existing facility next to Sendagaya Station, which will serve passengers visiting the Kengo Kuma-designed National Stadium during this year's Olympics.

Suppose Design Office aimed for the small building to create an impact despite its location, squeezed between an overpass on a station entrance.

"We thought about how to create an impact in an architecturally simple way, and out of several ways, we chose to use height," said Suppose Design Office.

"We wanted to create a sense of discomfort in the city by making a lump of concrete, which is normally heavy, look like it was floating so that it would become art in itself."

The 7.5-metre-ghlighgh toilet block is over twice as high as the station entrance, which combined with its monolithic concrete facades make it an imposing structure.

Its concrete walls are hung from central columns within the toilet block with a 500-millimetre gap left around the base of the building to allow some light and air into the structure.

According to the studio, the weight of the concrete combined with the floating effect was designed to convey a sense of contradiction.

"By constructing a space by carefully piling up relationships that are manifested by contradictions, such as 'a sense of floating due to heaviness' and 'the presence of light due to darkness', we sought to dissolve the boundary between the city and architecture and to create an attractive boundary where nature and architecture resonate with each other," explained the studio.

The 75-square-metre block is accessed by one door cut into the concrete facade facing the station.

This leads to a central area with washbasins and an accessible toilet with men's and women's toilets arranged on either side.

To create a "hotel-like appearance" within the block, the studio clad the cubicles in Akoya wood panelling and used brass signage throughout.

A long skylight running the length of the block illuminates it from above.

"Completely closed at eye level, symbolically letting in light from above, and ensuring ventilation through the slit at the foot of the building, we aimed to create an architecture that would allow people to experience the space as more than just a public restroom, as a device for making the surrounding environment apparent," said the studio.

Suppose Design Office's toilet block is the latest in a series of architect-designed public facilities that have recently been built in Tokyo. 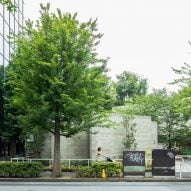 The studio believes that this is part of a city-wide effort to improve Tokyo ahead of the Olympics by focusing on small architectural interventions.

"We think this is the result of a conscious effort to revitalise the city for the Olympics," it said.

"The public toilets are small buildings, but their small size gives them a familiar scale," it continued.

"On the other hand, they tend to have an image of being disliked from a hygiene standpoint, so we think they are thinking of contributing to the improvement of the cultural level by maintaining architecture on a familiar scale while renewing that bad image."

Elsewhere in the city, the Nippon Foundation's Tokyo Toilet has seen seven toilets built by some of the world's best-known architects, including three Pritzer Prize-winners.

As part of the project, Shigeru Ban designed a pair of transparent blocks that are illuminated at night,  while Tadao Ando created a circular toilet and Fumihiko Maki topped his with a "cheerful roof".