Snøhetta has unveiled its plan to redesign and extend the museum dedicated to Norwegian explorer Thor Heyerdahl on the Bygdøy peninsula in Oslo.

The expansion will see a large wood-clad auditorium that is angled towards the sky added to the Kon-Tiki Museum, which houses vessels and artefacts used by Heyerdahl during his nautical expeditions.

Snøhetta designed the extension as part of a feasibility study for Kon-Tiki Museum – one of Norway's most visited museums that was originally built in 1957 to house the Kon-Tiki raft.

Heyerdahl sailed over 8,000 kilometres across the Pacific Ocean on the hand-built balsa raft from South America to the Polynesian islands in 1947 to demonstrate that ancient civilisations could travel vast distances across seas.

The proposed design would revamp the exhibition spaces where the Kon-Tiki raft and Ra II papyrus reed boat, which Heyerdahl used to sail from the west coast of Africa to Barbados in 1970, are displayed.

The centrepiece of the proposal would be an angular extension, which would be informed by the original building's triangular shape. 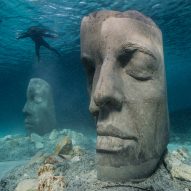 Set between the Kon-Tiki raft and Ra II boat, the wooden wedge-shaped structure would be angled towards the sky.

It's lower floor would contain a cafe with views out to the gardens, while the upper level will contain the multi-purpose auditorium.

"The museum's new centrepiece holds a large multi-purpose auditorium at the tip, with spectacular views of the garden and the sky," said Snøhetta.

"A place dedicated for young and old alike to learn and discuss the importance of consumption reduction and address the global challenges related to our lack of focus on ocean health."

According to the studio, the wooden wedge was designed to reflect a sail of a boat and aims to establish a connection between visitors and the outdoors.

The proposal will also include a garden filled with trees that will contain intimate spaces that visitors can explore and can also be used as a space for holding large events.

"With its multi-purpose auditorium and outdoor spaces, the new museum aims to transmit Heyerdahl's thoughts and bring his heritage and vision into the future," explained the studio.

Snøhetta was founded by Craig Dykers, Kjetil Trædal Thorsen and Christoph Kapeller in 1989. Earlier this year the studio released designs for a petal-shaped canopy for the Blanton Museum of Art at University of Texas.