Set in the centre of the city, the rooftop park is publicly accessible and has panoramic views of the capital of the Estado de Mexico.

Built on a former car park, Estación San José is designed as a venue that can connect the historic city centre and the nearby university district without taking away the site's original facilities.

The eight-storey building has a concrete frame wrapped in a permeable screen of metal mesh that extends all the way up as a screen around the park.

Cut-out sections in the perforated metal facade frame different views at each level.

"A gentle lightweight metallic skin encloses the volume, framing the most appreciated views: the Cathedral, the Cosmovitral and the Nevado de Toluca volcano," said FRPO.

The concrete slab superstructure has been left raw, with glimpses of the slim pillars and beams through the metal. Light filters through to the interiors, unobstructed by concrete outer walls.

On is lower levels, Estación San José is split in half, with the multi-storey car park connected by ramps on one side.

A combination of spaces, which are still being fitted out, will occupy the other side. FRPO said the mixed-use building is intended as a "new cultural, economic and activity hub" for the city. 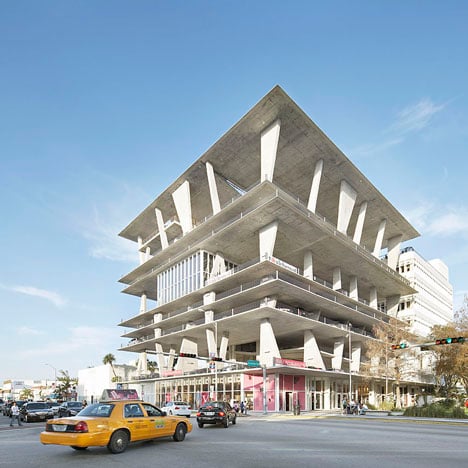 Floor plans are designed to flexible, with room for shops, cafes and cultural spaces alongside co-working offices.

The smaller two top floors rise above the open-air parking space at the top of the car park and will contain more meeting rooms and shared desk set-ups.

A large spiral staircase leads up to the park on the top floor.

Founded by Fernando Rodriguez and Pablo Oriol, FRPO is an architecture office based in Madrid. Previous projects include a housing block with rotating concrete shutters and a concrete pool house.

Photography is by LGM Studio.