Indian office MAIA Design Studio has designed a Pan-Asian restaurant in Bangalore, which brings local crafts together with a Tokyo-inspired palette of colours and patterns.

Lucky Chan is a casual restaurant serving sushi and dim-sum, which takes over the grand floor of a two-storey house.

Because it's a residential building, the space is divided up into a series of rooms. MAIA Design Studio founder Shruti Jaipuria saw this as an opportunity to explore a variety of different concepts.

Her interior design scheme gives each room its own character, but they all share an eclectic mix of colour, pattern and material.

"We were inspired by the hip Harajaku style of Tokyo while developing the colour palette," said Jaipuria, "but the material palette is more local".

"As an office, we aspire to use local material and craft in contemporary and unexpected contexts," she told Dezeen.

Lucky Chan can be divided up into five different zones: the main dining room, the open-air section, the passageway, the sushi bar and the private dining room.

The main dining room is perhaps the most simple of the spaces, although it features a very unique detail – hanging from the ceiling is an installation of 250 turned-wood sculptures, created in collaboration with local artisans.

These curvaceous wooden objects celebrate the tradition of hand-lathe woodwork in the nearby township of Channapatna.

Each piece is coloured with natural lacquers, made using substances that include turmeric, walnut bark and manjista root.

Mirrors lining the surrounding ceiling beams create the impression that the installation goes on forever.

Wooden chairs provide seating in both this space and the adjoining open-air section. These chairs feature seats hand-woven with coir, a coconut fibre, making use of another local craft technique. 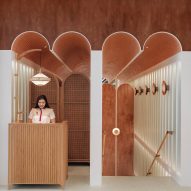 Mosaic tiles create a pattern of stripes on the end walls. The same tiles feature in the sushi bar, where they create a grid effect. They also form a chequerboard pattern on the table in the private dining room.

"Parallel lines and cross-grids started to play an important role while we were designing the space," said Jaipuria.

Birch plywood brings a more lightweight feel to these rooms, providing custom furniture and also panelling on the walls.

These wooden elements include a sushi bar with an integrated conveyor belt, which Jaipuria believes is the first of its kind in India.

Other details include silk lamps that were handmade in Pondicherry, an array of plants in colourful pots, and a neon sign that reads #heretogetlucky.

Photography is by Gokul Rao Kadam.