A podium made of recycled grey bricks links three clean-cut office blocks on the campus that Neri&Hu has created for elevator manufacturer Schindler in Shanghai, China.

Named Schindler City, the 32,400-square-metre complex in the Jiading district unites all of the company's departments in one place, having previously been scattered throughout Shanghai.

The campus comprises offices, showrooms, factories, warehouses, and a research facility, which local studio Neri&Hu has linked within the monochromatic office towers and their continuous, low-lying brick base.

The minimalist finish of the three office blocks nods to Schindler's Swiss origin, while the contrasting base of recycled bricks pays homage to traditional Chinese architecture and the local vernacular.

"The resulting design is both firmly grounded in local cultures and building traditions while celebrating the innovative and forward-thinking corporate culture of Schindler," Neri&Hu told Dezeen.

"The podium featuring grey brick, a common building material in China, is a nod towards the material heritage of the project's locale," it explained.

"For the glass boxes above, translucent channel glass sections, interspersed with white metal-framed window slots, compose a building facade that is bright, minimal, and elegant – a subtle reference to the company's Swiss background."

Neri&Hu's design was the winning entry in a competition for Schindler City. While providing space for all of the company's departments, the studio had to include office blocks within the design as permission had already been granted for these on-site.

However, the studio decided to challenge typical office block typology by combining them with the podium to create a "unified whole" – avoiding creating a series of isolated structures.

The podium, aided by the surrounding landscape and several courtyards both inside and outside the complex, also ensures that the blocks are unimposing and human in scale.

"The multiple office blocks were a given part of the initial brief, due to planning approvals already in place when we took on the project," the studio explained. 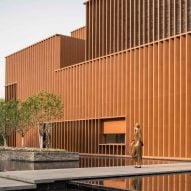 "So the challenge as we saw it, was to find a way to integrate all these separated units into a unified whole," it continued.

"We felt it needed a strong architectural element to tie everything together in a way that landscape alone could not – the brick base brings continuity and transitions seamlessly from interior to exterior spaces, so that people don't sense they have exited and reentered a different building when they move between the blocks."

The three towers are positioned at one end of the site and contain open office spaces for 800 people, including meeting rooms, lounges, a showroom, and a training centre.

Each of the three buildings also incorporates a multi-story atrium that is designed to visually and physically connect the different departments. Within the atriums are crisscrossing escalators, designed by Schindler, which Neri&Hu inserted to showcase the company's products.

Other notable elements in the Schindler City campus include a tall, slender white tower, which functions as a lift shaft to test the company's new products.

At the north-east end of the site, opposite the office towers, the podium rises in height to create a "fortress-like" boundary that contains a research facility. Its impermeable look is intended to reflect the private work conducted there.

Founded by Lyndon Neri and Rossana Hu in 2004, Neri&Hu is a Shanghai-based architecture and design studio. Other recent buildings completed by the studio include the Aranya Art Center in Qinhuangdao and the Junshan Cultural Center near Beijing that features angled aluminium louvres and reclaimed brick walls.

The practice is also known for furniture design, such as its art deco-inspired collection, as well as products including lamps that emulate morning sun.

Photography is by Annika Feuss unless stated.