The 66-storey residential building, which is due to complete later this year, is located in Lower Manhattan.

Residents have already begun to move into some of 130 William's 242 apartments. Developer Lightstone has released new photographs of the lobby and an apartment inside the 800-foot (244-metre) skyscraper.

Each of the homes, which range in size from studios to four-bedrooms, is framed by the arched bronze-framed windows that define the skyscraper's exterior.

David Adjaye has used the arches as a repeating motif throughout, with arched niches filled with ornaments lining the dramatic lobby and even arched mirrors in the bathrooms.

Bronze accents that recall the windows are also picked out in the interior's hardware, such as the door handles and showerheads.

The dark-walled lobby features a cantilevering black marble reception desk and bronze chairs upholstered in plush blue velvet in front of a fireplace.

A light feature with bubbles of hand-blown glass by Bocci is suspended over a wood and steel dining table by Atelier and eight silver Tom Faulkner dining chairs.

The kitchen features cabinetry by Pedini Italian and countertops made from Italian Pietra Cardosa stone quarried in the Alps.

A slab of Spanish Nero Marquina marble cantilevers from the kitchen island to form a breakfast bar for two high stools.

In the main bedroom, there is a platform bed with a stuffed headboard facing a Pierre Frey chair with walnut legs upholstered in alpaca wool and a wall-mounted console with gold-leaf doors. 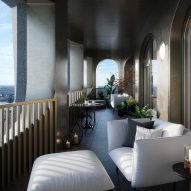 The primary bathroom is clad in Bianco Carrara Italian marble textured with fine ridges, with a bathtub and a walk-in shower behind smoked dark glass. A pair of sinks sit below a medicine cabinet designed by David Adjaye.

The skyscraper will be clad in dark, textured concrete and the architect has already suggested that his firm's first high-rise project in New York will be well suited to the city's birds and drone photography enthusiasts.