The 1.7-kilometre Stad Ship Tunnel, which will have a pair of stone entrances designed by Snøhetta, has been given the green light and construction is now set to begin in 2022.

The Norwegian Coastal Administration (NCA) received an assignment letter from the Ministry of Transport and Communications to begin preparing for the construction of the project.

Designed to make shipping safer along the west coast of Norway, the  Stad Ship Tunnel will connect the Kjødepollen bay and Vanylvsfjorden so that cargo and passenger ships of up to 16,000 tonnes can avoid dangerous shipping routes around the Stad peninsula.

It is believed to be the first tunnel for large ships built anywhere in the world.

"This is a large, comprehensive, and not at least interesting project," said NCA director general Einar Vik Arset. "We are more than ready to build the world's first full-scale ship tunnel."

Originally announced in 2017, the project has since received the official backing of the Norwegian Coastal Administration (NCA) and funding from the state. The Ministry of Transport and Communications is now preparing a proposition for the parliament to be presented in spring.

Once the project has parliamentary approval, plans are in place to sign a contractor before the end of this year for construction to begin in early 2022.

"If everything goes according to plan, the world’s first full-scale ship tunnel will be completed in 2025/2026," Terje Andreassen, the temporary project manager for the Stad Ship Tunnel at the NCA said in a statement.

Marking the boundary of the Norwegian Sea and the North Sea, the Stad peninsular is one of the most dangerous local areas for shipping and is considered one of the main barriers to running a fast passenger service along the coast.

"The Stad ocean is one of the most weather-exposed areas along the Norwegian coast. With a ship tunnel, we want to improve safety at sea," said minister of transport Knut Arild Hareide last year.

"The project will also facilitate the establishment of a high-speed vessel route and the transfer of goods from land to sea transport.”

Each end of the Stad Ship Tunnel will be framed by an entrance designed by architecture studio Snøhetta.

The studio looked to the peninsula's characteristic stone walls to create a design that would provide a visual impact and also blend with its natural environment.

Wire-cut and blasted stone will be used to create the entrance walls for the tunnel, giving the design a rough finish that contrasts with the regularity of its horizontal lines. 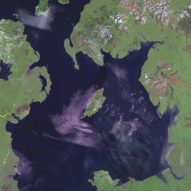 On its western side, an existing road will be rerouted over the tunnel on a new bridge that will offer a viewpoint to observe ships and boats approaching the tunnel.

The interior of the tunnel will be lit by LED hoses that also function as a wayfinding system.

Snøhetta recently unveiled its redesign for the Kon-Tiki Museum in Oslo and completed a carbon-negative Powerhouse Telemark office in Norway that aims to produce more energy than it consumes.