Casa Bell-Lloc by architecture office Studio Saxe is a concrete house featuring expansive coastal views and a swimming pool that reaches toward the sea.

Casa Bell-Lloc is located in Santa Teresa, a small town in Costa Rica's Puntarenas Province that is known for its pristine beaches and great surfing.

The full-time residence is tucked into a sloped site that overlooks the Pacific Ocean.

Casa Bell-Lloc was designed by architecture firm Studio Saxe, which is headquartered in San José and has satellite offices in Los Angeles and London. The team's goal was to create a durable, climate-responsive home that embraced its natural setting.

Roughly L-shaped in plan, the house consists of two levels that total 500 square metres. The lower portion is wedged into the hillside and is not visible when approaching from the road.

"In order to adapt to the topographic conditions, we decided to 'push' the house into the ground, thus creating the illusion of a one-storey house from the street and only revealing its true size once inside," the architects said.

Exterior walls are made of concrete – a material chosen for its sturdiness, along with its ability to keep the interior cool. 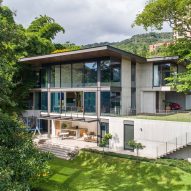 
"The clients were clear from the beginning that they wanted most of the home to be built in concrete for longevity, less maintenance, and thermal mass during the hot months of the year," the studio said.

The top floor holds an open-plan kitchen, dining area and living room, along with a master suite and carport. Two en-suite bedrooms and service quarters are located on the lower level. The floors are connected by a concrete stair.

"Due to the extreme pitch of the terrain, we decided to sink the private areas of bedrooms into the ground and thus allow the main living area to have the best expansive views on top," the team said.

At the heart of the ground floor is a slender swimming pool that gestures toward the sea, cantilevering over the hillside.

A folding, glazed door separates the pool from the interior living space. Overhead, a cutout in the roof enables direct sunlight to fall upon the turquoise water.

Studio Saxe was established by Benjamin Garcia Saxe in 2004. It has completed a number of houses and hotels in Costa Rica, including The Gilded Iguana surf resort and a residence clad in charred teak wood.