Dutch architect Reinier de Graaf talked about his latest novel The Masterplan in this live panel discussion by Dezeen for Architecture Matters.

De Graaf, who is a partner at architecture firm OMA, spoke to Dezeen's founder and editor-in-chief Marcus Fairs about the book, which tells of a young architect's pursuit of recognition.

In addition to the book's themes of legacy and the architectural dream, the panel also discussed masterplanning and the relationship between writing and architecture.

The Masterplan follows De Graaf's critically acclaimed first book Four Walls and a Roof: The Complex Nature of a Simple Profession, a collection of De Graaf's experiences and thoughts on contemporary architecture.

In addition to writing, De Graaf also founded OMA's think-tank AMO, and is a visiting professor of urban design at the University of Cambridge.

The architect recently spoke to Dezeen about the studio's work on two hospital projects and how he envisions the hospital of the future.

Aleksakova is the co-founder of Buromoscow, which she set up in 2004 with fellow architect Julia Burdova.

The pair are best known for designing landmark public spaces and mass housing in Moscow, including Triumfalnaya Square and Block 10.

Sultan is an architect, writer and co-founder of Los Angeles research and design studio Clocksss together with Chloe Wayne. 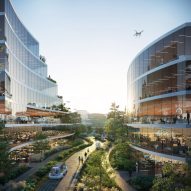 Sultan's writing, which covers science fiction, art, digital space and more, has been featured in such publications as 032c, Art Papers, Pin-Up and i-D.