Casa Covida is a hut in Colorado made from 3D-printed adobe by American studio Emerging Objects for two people to live together in isolation during the coronavirus pandemic.

Emerging Objects used Casa Covida as a case study for how a combination of modern and ancient technology could be combined to create a home big enough for two people to live in.

The experimental hut in the desert of San Luis Valley is formed of three connected cylindrical volumes that bulge slightly in the middle.

Its adobe walls are made from sand, silt, clay and water, printed using a three-axis SCARA (Selective Compliance Articulated Robot Arm) and left to dry and harden in the sun.

For the construction, the adobe was sifted by hand and mixed using a cement mixer before being pumped into the three-axis SCARA and sprayed out via a nozzle.

The robotic printer is light enough to be carried by two people and can be operated by just one person with a mobile phone.

Emerging Objects also created the software for the project, which it christened Potterware.

A wooden door in the central volume opens on to an open space that has two earthen benches, called tarima, as well as an open fireplace for cooking food and keeping warm during cold nights.

An inflatable pink roof can be erected if it rains or snows, or to keep the heat from the fire in when desired. From the outside, this colourful addition makes the ridged hut look "like a blooming cactus," said Emerging Objects.

One of the volumes next to the central cylinder is covered and contains a sleeping platform made from beetle kill pine – wood from trees killed by mountain pine beetles.

A heat-treated blackened version of the same wood was used for the doors and lintels.

On the other side, the third volume contains a sunken bathtub surrounded by black and shiny tumbled river stones.

The tub draws its water from an aquifer deep below the mountain desert landscape. An oculus in the roof frames views of the stars at night.

Emerging Objects also used 3D-printing to create some of the homeware objects for Casa Covida.

The door handles were made using a 3D-printed bioplastic mould, which was burned away as the handles were cast from aluminium cans that were collected from the desert roadside.

A clay cooking pot and lid, a form taken from the Pueblo pottery of New Mexico, was 3D printed from locally sourced micaceous clay. 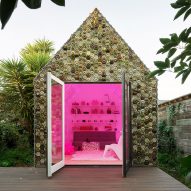 The benches are furnished with woven textiles. In the bedroom, the sleeping platform is covered with sheepskin, woven churro wool blankets and cushions that Emerging Objects designed in collaboration with local weaver Joshua Tafoya.

Founded by Ronald Rael and Virginia San Fratello, Emerging Objects has previously 3D printed a pavilion out of salt and a tiled shed covered in succulents.

Photography is by Elliot Ross and Emerging Objects.