Office S&M has completed a colourful extension to Overcast House in north London, which features on-trend hues such as Millennium Pink and Mint Green.

Local studio Office S&M, which is headed by architects Catrina Stewart and Hugh McEwen, added a ground-floor kitchen extension to the Victorian terraced house in Haringey.

As one of the clients works as a colour consultant the well-lit space was designed to double up as an area to meet with clients.

This replaced her south-facing studio at the front of the house that had variable sunlight conditions that made it hard to maintain colour consistency while working or holding meetings.

Part of the brief for the Overcast House, therefore, became about creating a space with even light that could be used as both a kitchen for entertaining and an artist's studio.

"Creating a well-lit space that is shielded from direct sunlight was an unusual challenge," Office S&M pointed out.

"Our response makes use of north light in the new extension, through carefully shaped roof lights which shield the windows from direct sun."

A saw-tooth roof of the kind typically found in industrial buildings or art galleries incorporates north-facing roof lights that let in even light throughout the day.

The timber-framed extension spans the full width of the house and looks out onto the garden through large glazed doors. A flat roof light set deeper in the plan provides an additional source of daylight in the new space.

The exterior of the new addition is clad in brightly pigmented concrete blocks that were custom made by London firm Mortise Concrete. The blocks have a U-shaped profile that creates shadows and adds visual interest to the facade.

"Starting from the profile of an extruded clay drainage channel, the new blocks create modelling on the rear facade even though there is no direct sun, and continue the investigation of indirect lighting which is being tested inside the extension," the architects explained. 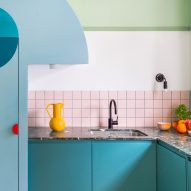 Unsurprisingly, given the client's profession, the colours and materials used in the new interior are carefully considered to ensure they perform both functionally and aesthetically.

Gold-leaf tiles used for the kitchen splashback create a warm and even light that is complemented by shades of green applied to the countertops and painted surfaces including the supporting structural beams.

"Discussions about colour were key to the development of the project, and elements of the house are picked out in trending colours," said Office S&M, adding that it used hues recently named as colours of the year by American colour company Pantone.

"The green is used to soften the beams within the domestic space, while the small bathroom uses colour blocking and vertical patterns in pink tiles to visually enlarge the space."

In addition to the open-plan kitchen, which can accommodate a table seating ten people for consultations, the project also involved the creation of a shower room to help future proof the house.

Office S&M is based in Hackney in north London and splits its time evenly between projects for public and private clients. It often experiments with colours and materials to create spaces that elevate the everyday experiences of its clients.

The studio's previous projects include the creation of a pink and green house on an infill site in north London, and the renovation of another London property that features scale-like shingles and brightly coloured window frames.