Called Betula, the collection consists of a chair and dresser with frames made entirely from timber slats connected using the same joint.

Thübeck created the collection after learning that large amounts of birch, which had already been refined and formed into uniform slats, was discarded because it was deemed unfit for sale.

He aimed to do as little as possible to these discarded pieces of timber to create useable furniture.

"The owner of the sawmill explained that roughly 70 per cent of all the logs that come to the facility is considered waste and gets burned," Thübeck told Dezeen.

"This inspired the idea to explore how the least amount of work could affect the value of the discarded material the most," he continued.

"So I developed a simple joint that could turn the waste into a building block, where all pieces have the same shape, creating infinite building possibilities."

The joint was created by milling a central cut into both ends of the slat to create a form that acts like the groove part of a tongue and groove joint.

Since this cut is exactly as wide as the slats, it allows all of the different pieces to lock together while acting as a distinctive visual detail throughout the collection.

Helping to hold the seat together are strips of rawhide – animal skin that has not been exposed to tanning – that was discarded by a nearby tannery due to imperfections.

"I let the soft hide dry and shrink around the wood structure of the Betula chair making it sturdy and strong," said Thübeck explained.

The matching dresser is wrapped in paper cord, which was partly made using birch trees from the same forest as the wooden slats.

"I found a sort of tension in bringing the two refined versions of the material back together, where the industrial processes have amplified different qualities that help to give the final piece its function," the designer explained. 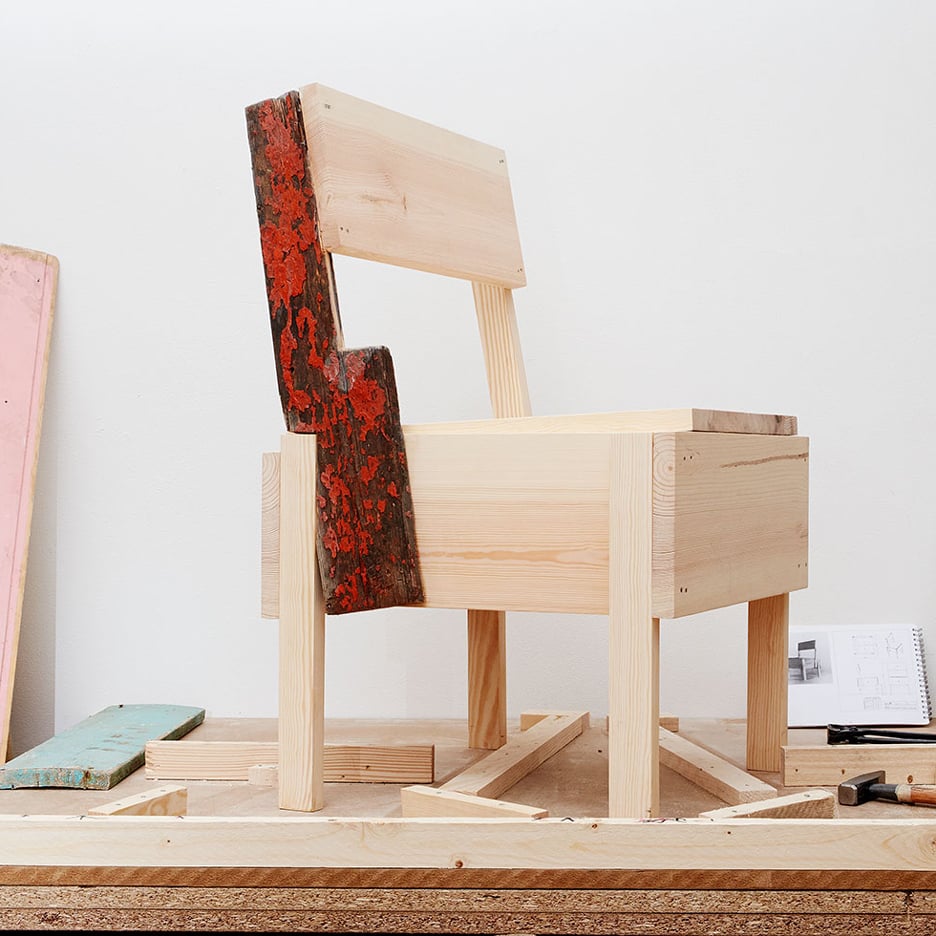 The Betula collection was informed by Enzo Mari's Autoprogettazione pieces and the Crate chair by Dutch designer Gerrit Rietveld, which can be built by anyone using only wooden boards and simple fasteners such as nails or screws.

But rather than building furniture that is permanently fused together, Thübeck expanded on this idea by creating a more flexible joint that could easily be disassembled.

"This was a way of prolonging the lifespan of the pieces, as they can be picked apart and put together as something else," he explained.

Other designers that have experimented with reclaimed wood include Viewport Studio, which has crafted a series of tables from blackened timber offcuts, while Jorge Diego Etienne created furniture from pine wood that was leftover from an affordable, prefabricated housing project in Latin America.