Architecture studio DF_DC has designed a concrete apartment block overlooking Lake Lugano in the south of Switzerland that has a concrete exoskeleton so that the interior spaces are "free to change over time".

Named after its street, Via Carona 6 contains 14 private-rental apartments that are shielded from the road by a concrete wall that was informed by the architecture of the 14th-century Pisa Baptistery.

Built on a Swiss hillside the five-storey building is located alongside a winding road and above a railway track.

DF_DF designed the block in response to its site with its massing organised in a way that did not obstruct neighbouring views of the lake, a blank wall facing the road and large openings facing towards the lake.

The design of its concrete street facade follows the curved topography of the road and was informed by largely blank walls found in Romanesque architecture and at the Pisa Baptistery.

It is made up of pitched, bush-hammered panels that are slotted within a gridded exoskeleton and punctuated only by the small entrance.

"The walls are cast in a curve and with a five-degree inclination in order to create a changing shadow throughout the day, accentuated by the curved massing," he told Dezeen.

On its northern side, the building opens up towards the lake to reveal large portico-terraces that are wrapped around glass-walled apartments.

At the top of the apartment block, a large penthouse protrudes over the side of the structure and is supported by angled columns.

The studio aimed to reduce the buildings future energy consumption by designing it in a way that could be changed over time with as little demolition as possible. 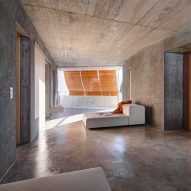 It used an exoskeletal-style structure combined with services that are consolidated within concrete cores- allowing the design to be adapted and modified over time with little structural intervention.

"The building is thought as a structural exoskeleton with consolidated service cores, thus leaving the rest of the plan free to change over time," he said.

"This applies to both modifying the dwelling typologies and to enable new uses altogether –student housing, hotel, workspace. Any of these future possibilities aims at as minimum demolition as possible."

Inside, shared spaces and apartments employ a similar raw material and colour palette. White pigmented concrete was used throughout the walls and ceilings of shared, staircases, hallway spaces as well as bathrooms, hallways and floors of the apartments.

A warmer sand hued pigment was applied to the ceilings of all other rooms in the homes.

Curved walls reference the street-facing curved wall and add a softness to the interior.

Glazed walls open out onto the portico-terraces serving as an acoustic buffer and provide vast views across the hillsides.

DF_DC is an architecture studio founded by Diego Calderon and Dario Franchini with offices in London and Switzerland.

Other projects by the studio include this concrete home that takes cues from Japanese architecture and its surrounding mountains, as well as this home in Switzerland that is banded by a series of concrete columns.