Anicorn Watches has released a NASA-branded NFT artwork that can be used to redeem a physical "secret timepiece" designed by NASA logo creator Richard Danne.

The NFT-backed digital artwork was recently sold on auction site Rarible, a market place for digital collectables, for around £30,000.

It depicts a NASA-branded, vacuum-packed disc rotating within a dark space. The NFT (non-fungible token) functions as a redeemable voucher that allows its purchaser to receive a limited edition Space Watch designed by Danne.

"Exclusively only two units available worldwide, each token is bundled with distinctive digital contents and can be used to redeem an actual, never disclosed secret timepiece – the Space Watch – designed by Richard Danne, the 'Father of the NASA design program'," explained Anicorn Watches.

Richard Danne is an award-winning graphic designer and founder of Danne and Blackburn, the design studio that led NASA's 1970s rebrand and designed its curving red "worm" wordmark, which was recently brought out of retirement.

The owner of the NFT will receive a collection of digital content including video and sound clips that detail the previously undisclosed design of the watch.

Images of the watch have not yet been released, but according to the brand, it is set within stainless steel housing and has a unique edition number engraved into its anti-reflective sapphire glass face.

It is finished with a black leather strap, matte black hardware and a stainless steel bracelet.

Created with Anicorn Watches, this is the first NASA-branded NFT approved by the American government space agency.

NFTs act as authentication certificates and are linked to digital artworks that are recorded on a blockchain that confirm their origin and ownership, similar to a cryptocurrency transaction.

Anicorn Watches is a creative studio and watchmaker and has previously made a range of special edition NASA watches.

"Space Watch is the one and only watch in the market designed by the creator of the worm logotype for NASA," added Anicorn Watches. 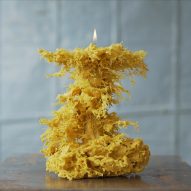 Bocci releases DIY instructions for its 64 candle as an NFT

Other NFT-encoded artworks include a digital fragrance by Look Labs that uses near-infrared spectroscopy to create a digital reflection of its scent, as well as DIY instructions that detail how to make a Bocci candle.

According to digital designers, NFTs are going to usher in a "creative and artistic renaissance".