A folded concrete roof designed by Studio Gang is now in place at the Arkansas Museum of Fine Arts in Little Rock, which is currently being overhauled by the studio.

American architecture office Studio Gang and landscape architecture firm SCAPE released photos of the roof ahead of the museum's anticipated May 2022 opening date.

Encompassing 133,000 square feet (12,300 square metres), when complete, the museum will be surrounded by 11 acres of landscaped public parkland.

The faceted roof is made of thin concreted arranged in angular folds. It covers a series of curving pavilions that will connect the existing structures on the site, which are being renovated and remodelled as part of the scheme. 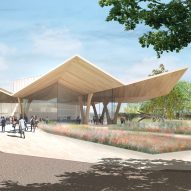 Formerly the Arkansas Arts Center, the original museum was built in 1937 by architect H Ray Burks and has been extended numerous times.

As part of a $142 million redesign, the new buildings topped by the folded concrete roof will cross museum complex, forming a central axis.

Acting "like the stem of a plant", said Studio Gang, this new throughway will have renovated galleries and performance space branching off from it.

At either end, the concrete roof will widen to frame the entrances. To the north, where the museum faces the city, the roof will wrap around a courtyard and frame a second storey hall with floor-to-ceiling glazing.

An expansion of the facilities undertaken in 1982 swallowed the original art deco limestone facade carved by local artist Benjamin D Brantly, so Studio Gang decided to re-instate it at the city-side entrance as part of the redesign.

At the other end, the glass-walled entryway will open onto a terrace with a restaurant and gardens landscaped by SCAPE featuring 50 native species of plants arranged in petal-shaped gardens to echo the design of the roof.

Recent cultural projects underway from Chigaco-based Studio Gang include an extension to the American Natural History Museum in New York and the redesign of a park in Memphis.