American architecture firm Studio Gang has released an updated set of renderings of its undulating addition to the American Natural History Museum in Manhattan.

Studio Gang unveiled new renderings of the addition, known as the Richard Gilder Center, to coincide with the extension breaking ground last week.

The centre is designed to add galleries, classrooms, a theatre and a library to the American Museum of Natural History in New York's Upper West Side. It will also include an insectarium and a year-round living butterfly exhibit.

The scheme, which was first revealed in 2015, is intended to reference an undulating facade inspired by natural earth processes and rock formations. The new images reveal the walls will comprise thick pale blocks with irregularly shaped windows as openings.

"Our design for the Gilder Center will invite visitors to explore the wonders of the museum with its openness and smooth, flowing geometry," said studio founder Jeanne Gang at the ground-breaking ceremony on 12 June.

Among the feature spaces of the building is the Central Exhibition Hall,  an atrium flanked by expansive glass walls that will welcoming. Its cavernous interiors, comprising textured walls and pathways, will form a continuation of the rock-like exterior. A large skylight will top the addition's atrium, bringing in additional natural light.

"Through a network of new connections, people will be able to follow their own curiosity to discover treasures of natural history," Gang added. "This network is accessed through the Central Exhibition Hall, which utilises the fluidity of concrete to create a porous structure and iconic interior."

Gilder Center will rise seven storeys and measure 230,000 square feet (21,367 square metres). Connections between new and existing parts of the museum are also incorporated into the design. 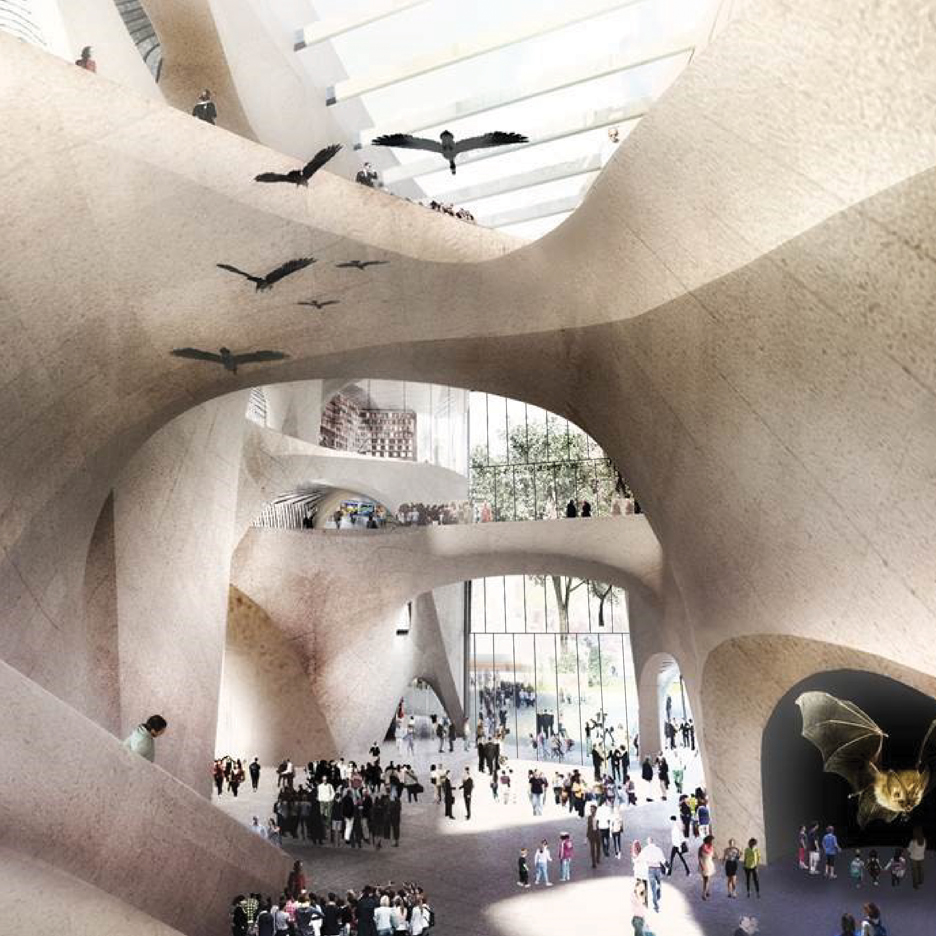 Other details include curvilinear openings with glazed balustrades that allow visitors to glimpse across the central area.

Exhibits will be designed by New York firm Ralph Appelbaum Associates, including a multi-storey glass volume hosting approximately four million specimens. From here, visitors will be able to see into working collections areas for the first time.

"The Gilder Center's light-filled canyons will give a generation of visitors memorable interactions with the passionately collected and scientifically researched evidence of our place in nature," said Ralph Appelbaum of Ralph Appelbaum Associates at the event.

"Innovative learning opportunities make discovery and problem-solving a creative activity for all visitors, and this new facility will be a great testament to New York City philanthropy and courageous leadership," he added.

Studio Gang's addition will connect 10 buildings across the sprawling campus of the American Museum of Natural History, while replacing three existing ones.

The building, which received approval from the city's Landmarks Preservation Commission in 2016, will join the 150-year-old museum and its varied-style buildings, which range from Victorian Gothic to Romanesque Revival and more modern designs.

"The new building will be both a literal and abstract reference to the purpose of the Museum and to the forms, materials, and details of the other prominent buildings within this complex," said New York City Landmarks Preservation commission chair Sarah Carroll.

Gilder Center will be adjacent to Theodore Roosevelt Park, with lush plantings, trees pathways and outdoor seating integrated with its main entrance.

Also as part of the project, Massachusetts firm Reed Hilderbrand will lead the landscape design, including upgraded drainage and irrigation, a wider entrance from Columbus Avenue, and path adjustments by the Nobel Monument to relieve congestion and provide more off-path seating.

The museum building is expected to receive a gold LEED (Leadership in Energy and Environmental Design) in recognition of its sustainable design features, which include plans to reduce waste and conserve energy.

Renderings are by MIR and Studio Gang unless stated otherwise.