The building – officially called the Phil and Penny Knight Campus for Accelerating Scientific Impact – is located on the University of Oregon's campus in Eugene.

The project was made possible by a $500 million (£359 million) gift from Nike co-founder Phil Knight and his wife, Penny. Over the years, Phil Knight has been a significant contributor to the university, where he earned his bachelor's degree in 1959.

The new academic facility brings together researchers from multiple disciplines, including engineering, applied sciences and business.

Two firms were commissioned to design the project – New York's Ennead Architects and Bora Architecture & Interiors, which is based in Portland, Oregon.

"Our goal for the Knight Campus was the creation of a humanistic research machine,"  said design partner at Ennead Architects Todd Schliemann.

"One that supports practical needs and aesthetic aspirations, but more importantly, one that inspires the people who work in it, those that move through it, and those that simply pass by."

The two buildings are organized around a central courtyard that is topped with a canopy made of ETFE (ethylene tetrafluoroethylene). The transparent covering provides rain protection while allowing light to pass through.

The facility's southern elevation features a distinctive, double-skin facade with triangular glass panels. The design alludes to moving water, such as the Willamette River, which passes through campus.

"Sunlight floods the interior through a skin of folded-glass panels, emulating water cascading over rock formations and offering views that invite the outdoors inside," the team said of the facade.

Also on the south is a glazed pedestrian bridge that stretches over a street, connecting the facility to other research buildings on campus.

The bridge has two splayed arches that spring from a common support point on each side of the road. The walkway enclosure is supported by tension cables.

"The bridge has a tied arch design that is self-supporting, simple, symmetrical and visually light," the team said. 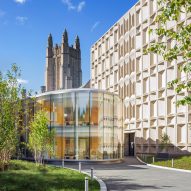 Once inside the building, visitors encounter light-filled rooms that are designed to foster interactivity.

The ground level encompasses a variety of spaces, including a lecture hall, a training room and social zones. On the upper levels, one finds laboratories, classrooms and communal areas.

Certain areas have 21-foot-high (6.4-metre) ceilings, allowing for the insertion of mezzanines made of mass timber. These intermediate levels hold offices for faculty members.

Workspaces were designed to be flexible, transparent and efficient. In the labs, the teams placed a glazed wall between write-up desks and the lab bench area. Traditionally, desks are incorporated into lab benches.

"This transparency not only promotes communication in the labs, but it heightens building performance," the team said. "By reducing the volume of the bench areas, fewer air changes are necessary, and energy usage is diminished."

Other elements that help reduce energy consumption include active chilled beams and a heat recovery chiller. The facility is aiming for LEED Gold certification from the US Green Building Council.

Ennead, formerly known as Polshek Partnership, was started in 1963 by James Stewart Polshek.

The firm has completed a number of academic projects, including a law school in Phoenix with sandstone cladding and sky bridges, and an engineering school in Austin that features a giant metal lattice.