In this live talk produced by Dezeen to launch a new collaboration with V–A–C , Space Caviar co-founder Joseph Grima introduced Non-Extractive Architecture, a manifesto and exhibition advocating for a new type of architecture that does not exploit the planet.

Non-Extractive Architecture, which takes the form of a written manifesto by Space Caviar as well as an exhibition, calls on architects to design buildings that do not deplete the earth's natural resources.

The manifesto was recently published by cultural foundation V–A–C and Sternberg Press, while an exhibition on the same topic at V–A–C's Venetian headquarters was installed in March.

The talk is titled Non-Extractive Architecture: On Designing Without Depletion, and launched a collaboration between Dezeen and V–A–C that will track the progress of the programme.

Grima spoke to Dezeen's founder and editor-in-chief Marcus Fairs about what non-extractive architecture means, the aims of the initiative, and developments that have taken place in the research programme since the exhibition opened.

"Non-extractive architecture questions the assumption that building must inevitably cause some kind of irreversible damage or depletion somewhere - preferably somewhere else - and the best we can do as architects is limit the damage done," Grima told Dezeen in a recent interview.

"Our goal as architects is not to limit carbon emissions," he added. "It is to come up with an idea of architecture that is not intrinsically dependent on some form of exploitation." 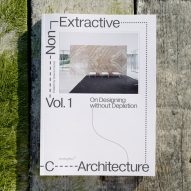 The exhibition will run until January 2022. It will act as a live research platform to coincide with the Venice Architecture Biennale, which is due to open in May after being postponed from last year due to the pandemic.

Taking place at V–A–C Zattere, a renovated palazzo on the Canale dell Giudecca in Venice, the project will generate research for a subsequent book due to be published next year.

Based between Milan and London, Space Caviar is a research studio that explores architecture, technology, politics and the public realm. It was founded in 2013 by Grima and Tamar Shafrir.

Previous projects by Space Caviar include an algorithmic journalism machine that produced magazines on the fly at Milan design week 2014, and an exhibition in the same year set in a derelict school in Kortrijk that explored how perceptions of the home have changed.

Alongside his work at Space Caviar, Grima is creative director at Design Academy Eindhoven and chief curator of design at Milan's Triennale di Milano museum, as well as co-founder of Milanese design platform Alcova. He has curated installations for events including the Venice Architecture Biennale and the Istanbul Design Biennial.

Grima previously appeared on a panel to discuss how designing for customisability can democratise the built environment as part of our Dezeen x MINI Living initiative.