Architecture studio Adjaye Associates has created a triangular memorial in London for Brixton resident Cherry Groce who was wrongfully shot by police in 1985.

Set in Windrush Square in Brixton, the structure was designed by Adjaye Associates to be both a memorial and a small pavilion for use by the community.

Funded by the Cherry Groce Foundation, the memorial is dedicated to Groce, a black woman who was shot by the Metropolitan Police in her own home in 1985, which left her paralysed. Groce passed away as a result of her injuries in 2011.

The shooting of Groce led to the 1985 Brixton riot. Almost 30 years later in 2014, the police publicly apologised for the wrongful shooting.

"I am honoured to celebrate the unveiling of this project and the representation it brings to the black community for Brixton, London, and the UK at large," said Adjaye Associates founder David Adjaye.

"It is my sincere hope that the restorative justice that is borne from the making of this pavilion can help us all learn from and be better neighbours to each other in the city that we live in."

The memorial pavilion consists of two triangular elements connected by a single column that is "representative of Cherry's strength and support of her community".

The triangular plinth contains integrated seating, while the second triangle shelters the pavilion. 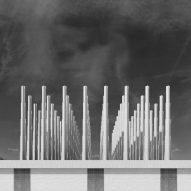 It is topped with a planted roof created to be "a reminder of change, growth and optimism".

"In loving memory of Cherry Groce" is engraved on all three sides of the triangular roof.

According to the studio, the pavilion's angular forms were also designed to complement existing landscaping in the square and the neighbouring memorial to African and Caribbean soldiers.

Adjaye Associates is designing several other memorials around the world, including the UK Holocaust memorial with Israeli architect Ron Arad and a memorial to victims of terrorism in Niger. 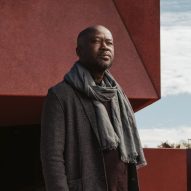 Adjaye recently wrote the foward to a book on memorial architecture called In Memory Of: Designing Contemporary Memorials. In a panel discussion about the publication, he said that the lack of memorials dedicated to the victims of slavery is leading to ignorance and memory loss.

Photography is by Michelle Äärlaht.