As part of our Dezeen x Phaidon collaboration, we teamed up with the publisher to host a live talk with Spencer Bailey, David Adjaye and Michael Bierut about the significance of memorials in the 21st century.

Moderated by Bailey, Phaidon's editor at large, the talk looked at the topic of his new book, In Memory Of: Designing Contemporary Memorials, which explores and tracks the changing expression of memorial design.

"Memorials hold a special position in the cultural memory of communities, cultures and nations," Phaidon told Dezeen. "They recognise hardship and sacrifice, as well as commemorate some of the most destructive and painful events in history."

"Over the past several decades, beginning with Maya Lin’s Vietnam Veterans Memorial (1982) in Washington DC, these complex and occasionally contradictory sites have become increasingly spatial and abstract, moving away from figurative monumentalisation," the publisher explained.

The panel explored the relevance of memorials in the 21st century, discussed the emergence of abstract expression in memorial design and question why the contemporary approach to creating memorials achieves an emotional power and significance that figurative expression rarely does.

On the panel was the RIBA Royal Gold Medal-winning architect Adjaye, who wrote the foreword to the book.

No stranger to memorial design, Adjaye is behind the ongoing UK Holocaust memorial together with Israeli architect Ron Arad.

He has recently revealed the design of a memorial to victims of terrorism in Niger and a public memorial for a Cherry Groce, a black woman shot by police in Brixton, London in 1985.

Adjaye also curated the Making Memory exhibition in 2019 at the Design Museum in London, which aimed to challenge the way people experience memorials and monuments.

Bailey also spoke to graphic designer and a partner at design firm Pentagram, Bierut, who oversaw the design and layout of the In Memory Of book together with Laitsz Ho, also from Pentagram.

Bierut is the designer behind Hillary Clinton's 2016 campaign logo and has previously led projects for Pentagram such as the recent redesign of Yahoo's graphic identity.

Bailey is an American writer, editor and journalist who was made editor-at-large of Phaidon in 2018 after five years at the helm of Surface magazine. 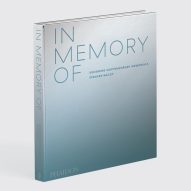 Competition: win a copy of In Memory Of: Designing Contemporary Memorials

In Memory Of: Designing Contemporary Memorials is available to buy now on Phaidon's website.

As part of our collaboration with Phaidon, we are giving away 5 hard copies of the book to Dezeen readers that enter a draw. You can enter the competition by clicking here.

In Memory Of: Designing Contemporary Memorials talk took place on 28 October at 5pm UK time. See Dezeen Events Guide for an up-to-date list of architecture and design events taking place around the world.