Called The Independent, the 688-feet (212-metre) tower is the tallest in the booming city. Completed in 2019, it overtook The Austonian, a 56-storey residential tower that was built in the Texan capital in 2010.

The amenity deck at the 34th floor cantilevers out 30 feet (nine metres) and has wrap-around glazing.

Rhode Partners described the new apartment building as a "vertical neighbourhood", with 363 apartments arranged in four cuboid tiers that are offset vertically from each other.

"Each tier is slid and mirrored around a central core, creating an assortment of unit types and views," Rhode Partners told Dezeen.

The tower's shape was informed by the Capitol View Corridors, a set of legal restrictions in Austin that prevents any new high rise structures in the downtown area from blocking views of the

An angular outdoor swimming pool for residents occupies a deck on the ninth floor. The tower's various amenity rooms are finished in walnut and white oak.

At the base of the skyscraper is a podium, and the crown is occupied by a 50,000-gallon damper tank to help keep the tower stable.

With an efficient heating, ventilation and air-conditioning (HVAC) system, the tower is able to function as net-energy-neutral for a significant portion of the year, according to the architects.

A regenerative elevator system captures heat from lift operations and converts it into reusable energy.

Founded in 2006 by Brett Rhode, Rhode Partners is an architecture and interior design office based in Austin, Texas. 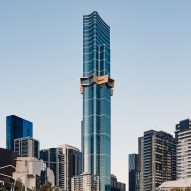 Austin is currently experiencing a real estate boom, with demand for housing rising as companies such as Google, Apple and Tesla expand in the city and people relocate from California in the wake of the coronavirus pandemic.

New design-focused hotels such as Hotel Magdelena and Austin Proper Hotel and Residences, which features interiors by Dezeen Awards judge Kelly Werstler, have opened in the city this year, while Snøhetta has designed a new space for the Blanton Museum of Art at the University of Texas.

Photography is by Nick Simonite unless otherwise stated.