Hotel Magdalena's sloping architecture is designed to recall the gently inclined landscape of the nearby Barton Springs, a popular outdoor swimming spot.

Bunkhouse Group and Lake Flato incorporated elements from both mid-century Austin icons in the interiors.

Guests are welcomed at two lobbies. The valet lobby is filled with pieces such as a Marset Dipping Lamp and a plush 1970s Harvey Probber sofa named Deep Tuft, designed to mimic the tufted seating found in luxury cars.

A Moroso sofa and coffee tables are placed alongside a custom oval wooden retail table crafted by Quarter Lab, an Austin-based woodworker.

Unstained white oak tambour forms the main lobby's desk, behind which colourful ceramic pots by local designer Rory Foster are placed, as well as the hotel's own book collection sourced from Half Price Books.

"When we were styling the lobby, we pictured a person who lived in an effortlessly cool house on Lake Austin," said Bunkhouse Group's vice president of design and development Tenaya Hills.

"We thought about what they would collect on their travels, what they found interesting, and what books and records they'd have," Hills told Dezeen.

A scattering of 70s original collages by the late Graham Harmon also decorates one of the lobby's white walls. It is understood that Harmon painted the works in Austin.

"The story of the hotel is the story of Austin," said Hills. "The buildings are inspired by 1950s Austin lake houses, which then informed the materials you see and the furniture system we designed for the guest rooms."

Influenced by designers such as Le Corbusier and Alvar Aalto, the hotel's 89 rooms have smart systems of combination furniture.

Bespoke beds are built-in and crafted from walnut wood, and inlay desks separate each room's bed from its small living space.

Bathrooms tiled in blue, red, yellow or green inform the colour of each room's more subtle design elements, such as various Christian Rathbone throw pillows adorned in what Hills describes as "hippie textiles," and custom bedside lighting by David Weeks.

Overlooking the pool, the hotel's outdoor bar area is a colourful space with soft seating by Expormim and clusters of umbrellas.

Clad in terracotta tiles, the bar itself has a playful terrazzo top designed by Concrete Collaborative.

Hotel Magdalena also has a restaurant. Summer House on Music Lane is a bright and airy space furnished with two-tone green Mathilda dining and bar chairs designed by Patrica Urquiola for Moroso.

"We went for a palette of natural materials – stone and wood and a high gloss ceramic tile. The main colour woven throughout is green," said Hills.

Like in the hotel's eclectic lobbies, vintage treasures made from coloured glass and ceramics line the restaurant's bar shelves. 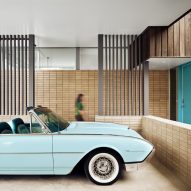 Local craftsmanship is celebrated in the form of a bespoke bench by Litmus Industries and artwork by Graham Harmon and Michelle Billette sourced at Round Top Antiques Fair.

Bunkhouse Group is a hospitality company based in Austin. Lake Flato is an American architecture firm founded in 1984. The firm recently designed a marine research centre in Mississippi formed from six pine buildings.

Other eclectic interior spaces in Austin include a hotel by Kelly Wearstler with a sculptural oak staircase, and a restaurant filled with hanging plants and used books created by Mickie Spencer.

Photography is by Nick Simonite.