Eight local designers have created unusual furniture pieces for the Fictions exhibition that was set in dystopian surroundings in Montreal, Canada.

The thirteen pieces, which were shown online as part of Fictions, include chairs partially encased in bronze glass, secretive cabinets carved in limestone and totem-like clay works.

Described as "fictions of mutated furniture," many of the pieces have shapes and functions that seem unusual or otherwordly.

Curator Nicolas Bellavance-Lecompte said the coronavirus pandemic had lead to the digital initiative, which was organised by non-profit organisation Canadian Creators Collective (the CCC).

All are Montreal-based and were initially supposed to show their pieces at Salone del Mobile 2020, which was cancelled due to the coronavirus.

The pandemic also influenced the theme of the virtual show, which was envisioned as being set in a nondescript post-apocalyptic environment at the heart of Montreal.

The pieces were filmed inside a bunker-like space in Montreal where some of the artists have their studios and broadcast as an immersive virtual exhibition over two weeks in April and May.

Visitors to the virtual show were able to choose which camera angles to see the pieces from in a nod to 1970s sci-fi and surveillance cameras.

"Even if the term 'post-apocalyptic' is quite a strong statement it also reflects the actual context and the evolution of the project Fictions before and during the pandemic," Bellavance-Lecompte told Dezeen.

"The location of the movie and the virtual exhibition was not initially part of the concept," he continued.

"It became an interesting strategy to showcase the works in an industrial bunker-like space and create links with the city of Montreal at a later stage and brought another layer to the whole concept."

The pieces on display include Bard's Cabinet Bone 01 and 02, two elongated, abstract cabinets carved in white maple and limestone that look solid but unfold to reveal their shelves.

Similarly, Girardin's Totem clay sculptures have a monolithic feel and were designed to be decorative while creating a different way to look at objects.

The location in which the pieces were shown contributed to the moody feel of the exhibition and visitors were encouraged to check in during different times of day to see how the light in the bunker changed.

Lambert & Fils played with this concept of changing light with Paravent, a large-scale light installation that the brand described as "a partition in aluminium and negative space." 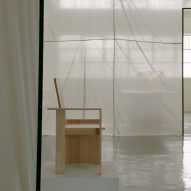 After Hours celebrates the side-hustle culture among Melbourne's designers

Claste Collection's Lest We Be Kings has the opposite effect, shielding its users.

The studio's two throne-like chairs are encased in bronze-coloured glass, which reduces the visual connection to the world surrounding those who sit on them.

While Bellavance-Lecompte had worked with virtual concepts before, the curator believes that the pandemic has moved the concept forward.

"I believe the pandemic projected us ten years ahead in the global 'digitalisation' process and even after, virtual formats will for sure stay as new standards and ways to communicate about projects," he concluded.

Fictions was on between 22 April and 4 May. See Dezeen Events Guide for an up-to-date list of architecture and design events taking place around the world.