Volker Haug Studio has unveiled a Melbourne Design Week exhibition featuring projects created by artists, designers and architects outside of their day jobs.

After Hours is a showcase of side projects by eight individuals and studios, celebrating how each has been able to produce work outside the limits of their field.

As the exhibition text states, it features "furniture produced by interior designers, functional objects created by visual artists, and installations designed by architects".

Responding to the Covid-19 pandemic, when home and work lives became inevitably blurred, the studio wanted to "bring to the forefront artistic pursuits that are often pushed to the wayside by daily business".

"The pandemic granted us a new moment to take a step back and really engage with our cohorts in the Melbourne design and arts community," said Volker Haug Studio designer Abde Nouamani.

Volker Haug Studio – a lighting design office led by designer Volker Haug – wanted to show that the city has an underground creative scene that is just as active as the professional studios.

"We wanted this to be an invitation to the other creatives in our orbits, to be working on and toward something together," he told Dezeen.

Du Puy's design, called Arm-chair, is a comment on the tension between work and leisure time, with one arm resting and the other on alert.

Varendorff, of ACV Studio, has created various pieces using found objects. As well as the table lamps, which have frames made out of metal tubes, she has created chairs made out of recycled bike wheel rims.

Ritz & Ghougassian's works are reminiscent of textile design. By repeatedly making pages with pencil lines, they have created large-scale artworks. 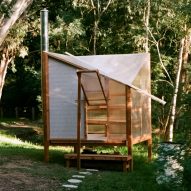 Volker Haug Studio has contributed one of its own designs to the show – a rug designed to recall a sunset across the Melbourne cityscape.

"It's inspired by the imprint of built forms against the flat backdrop of the sky at dusk, tracing the silhouetted architectural forms," said Nouamani.

Interior designer Brahman Perera has created a bespoke lighting installation, featuring a pendant made by applying layers of plaster over a wireframe.

The exhibition is completed by abstract artworks by graphic designer Wes Waddell, of Studio HiHo, and a photography project by art director Marsha Golemac.

After Hours is open from 9am to 5pm every day from Friday 26 March to Monday 5 April 2021, as part of Melbourne Design Week. See Dezeen Events Guide for an up-to-date list of architecture and design events taking place around the world.