London studio Unscene Architecture explores how pubs, high streets and green spaces in the UK can be made more inclusive in the British Pavilion at this year's Venice Architecture Biennale.

The exhibition, named The Garden of Privatised Delights, comprises a series of interactive rooms that investigate how specific public spaces can be better designed.

It was curated by Manijeh Verghese and Madeleine Kessler of Unscene Architecture in response to a rapid increase in privately-owned public space in Britain.

The aim is to encourage discourse on how private and public sectors can work together to improve the use of, access to and ownership of all public spaces.

"The high street, the pub, even the public toilet are more under threat than ever before," explained Verghese.

"How public space has traditionally been designed and used needs urgent rethinking, and The Garden of Privatised Delights intends to inspire and encourage action to support those challenges," she continued.

"The past year has highlighted the importance of access to public space and how this reflects the inequalities in our society," added the duo.

"The themes explored within The Garden of Privatised Delights have become even more urgent as a result of the global pandemic, including the demise of the high street; how facial recognition technology is used; access to green space; who owns public space; and the decline in dedicated social places for teenagers," they told Dezeen.

The British Pavilion is commissioned by the British Council for the Venice Architecture Biennale, the most significant international festival in the architecture calendar.

The Garden of Privatised Delights is showing at this year's edition of the international biennale until 21 November 2021.

It takes inspiration from The Garden of Earthly Delights, a triptych painting by Hieronymus Bosch that depicts the garden of Eden, Hell, and earth as the middle ground.

Similarly, Unscene Architecture explores the concept of privatised public space as the midpoint between "the utopia of common land before the Enclosures Act of the 18th century" and "the dystopia of total privatisation".

The pavilion is divided into six immersive rooms that emulate familiar UK public spaces, such as a pub and an inaccessible garden square.

They are all curated to encourage visitors to sit, reflect and interact, avoiding the use of more traditional exhibits in order to engage a wider audience.

"Rather than representing architecture through images, models and drawings, we wanted to use the opportunity to test physical design ideas and create immersive experiences that encourage everyone – architects and non-architects alike – to inhabit and actively engage with," said the studio.

The rooms were developed in collaboration with designers including The Decorators, Built Works, Studio Polpo, Public Works and vPPR.

The Decorators' room explores the future of British pubs and how they can serve the wider community, while Built Works examines how facial recognition technology is used in public spaces.

Studio Polpo's room delves into the role of high street, while Public Works and vPPR's exhibits investigate the transparency around land ownership and spaces for young people respectively. 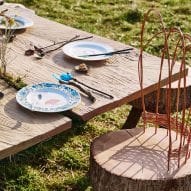 In Unscene Architecture's room, installations explore access to green space in the UK and how to make better use of it in urban environments.

The studio has also transformed a public toilet in the basement of the British Pavilion to showcase the importance of infrastructure that allows access to public space.

"Each room asks a question of the visitor to reflect on this type of privatised public space and how it could be designed in the future," Unscene Architecture said.

"Instead of telling the visitor what to do in each space, our hope is that we learn from how they experience and use the space over the coming months."

Due to the ongoing pandemic, the British Pavilion will be made widely available online through "a range of social media and online content".

There will also be a programme of online events and physical workshops in the UK, while films of each room will be featured on the British Council's website.

The pair installed a huge platform atop the pavilion to create a "place of both refuge and exile", intended to address topics including colonialism, climate change and Brexit.

Photography is by Cristiano Corte, courtesy of the British Council.

The Garden of Privatised Delights will be on display in the Giardini as part of the Venice Architecture Biennale, which takes place from 22 May to 21 November 2021. See Dezeen Events Guide for all the latest information you need to know to attend the event, as well as a list of other architecture and design events taking place around the world.