In our next video showcasing the finalists of Dezeen and LG Display's OLEDs Go! competition, Italian designer Gianfranco Vasselli explains his concept for an OLED display incorporated into a shelving unit so you can view it while lying in bed.

Called Console, Venice-based designer Vasselli's concept is a wooden shelf with a multi-functional OLED screen built into its underside.

It is designed to be mounted above a bed, so that users can browse social media, watch television or surf the web while lying in bed.

The shelving unit can be used for storage and the screen itself can also be used as a reading light.

Console is finished in solid wood and comes in different sizes and heights. It can either be a standalone unit with legs or be mounted directly on the wall.

Recognising that most people use their phones and laptops right before and after going to sleep, Vasselli's design aims to be a more comfortable solution to interacting with digital devices in bed.

"Our smartphones are the first object we touch when we wake up and the last thing we put down before falling asleep," Vasselli explained in the video, which Dezeen shot in Venice.

"My concept would allow people to go about the activities they use a smartphone for in a more comfortable way.” 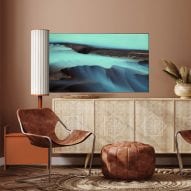 Doyeon Shin designs OLED television that unfurls like a flag