Mint green and burgundy are among the hues incorporated into a Montreal co-working space that Canadian firm Ivy Studio designed to "stand out from its competitors."

The office is located on the second floor of a 743-square-metre building in Verdun, one of city's trendiest neighbourhoods. The space formerly housed a Jiu Jitsu gym and a beauty salon.

This is the first location for the new co-working brand Spacial. Local practice Ivy Studio was charged with designing a flexible work environment for up to 120 people.

"Being the first of its brand, this space had to stand out from its competitors by offering a unique vision for co-working," the team said.

The team divided the rectangular space into two distinct zones.

The front portion encompasses public areas that are largely used for informal working, socialising and relaxing. In the rear, the team created a more private area with about two dozen rentable offices in varying sizes. 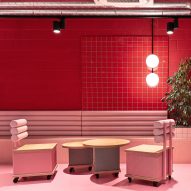 Ten bright and bold interiors that make use of colour theory

Throughout the space, contemporary finishes and decor are paired with original building elements, such as exposed ceiling joists and brick surfaces.

In many areas, the team coated the walls with an off-white plaster and covered the floors with light-grey terrazzo. Much of the furniture is black, although dashes of colour are sprinkled throughout.

Upon entering, one encounters a rounded reception desk made of zinc with a rainbow-coloured finish. Hanging on a wall is a blue, circular mirror – one of several rounded elements in the venue.

To one side of the foyer is a lounge and a trio of conference rooms, each with a wall-mounted screen.

"In the conference rooms, televisions are camouflaged in front of matching, circular black mirrors, each backlit to put forward the white-washed brick wall," the team said.

To the other side of the foyer is a second public area. This one encompasses a kitchen and dining space, including private booths that are well-suited for small groups.

The kitchen features curved cabinetry with a glossy mint-green finish, and a backsplash and island covered with Rosso Levanto marble. The base of the island is made of stainless steel, which mimics the chrome planters found throughout the office.

Situated near the kitchen are the bathrooms, which have black ceramic tiles and matching plumbing fixtures.

Behind the reception desk is a glazed-block wall that separates the public zone from the private offices, while still enabling light to pass through.

The offices are arrayed along corridors with tile flooring and brick walls. Both fixed and sliding glass panels enclose the work spaces. A dark burgundy hue was chosen for the carpeting and mullions.

To ensure the private area felt bright and welcoming, the team installed 20 skylights above the corridors.

"With the exposed brick walls, sandstone floor tiles and abundance of natural light pouring into the hallways, the general feeling resembles that of working in an exterior courtyard," the team said.

Other co-working spaces in Canada include an office designed by Henri Cleinge within Montreal's old Royal Bank, and a women-only space in Toronto that was designed by MMNT Studio to feel peaceful yet playful.