Following the death of celebrated architect Paulo Mendes da Rocha at the age of 92, we look back at eight key projects from concrete houses to museums that cemented his global reputation.

Most of Mendes da Rocha's work is in his native Brazil, but the architect gained international recognition during his career and won a host of awards.

A recipient of both the Pritzker Architecture Prize and RIBA Gold Medal, Mendes da Rocha was regarded as one of the major architects of his time. 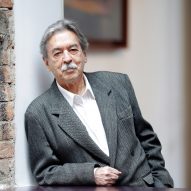 The Brazilian architect's most famous buildings are in São Paulo. Known for his work with raw concrete, Mendes da Rocha is considered to have modernised Brazil's landscape from the 1950s onwards.

The Vitória-born architect died at a hospital in São Paulo on 23 May 2021 from lung cancer.

To mark Mendes da Rocha's passing, here are eight key projects he completed during his career:

Mendes da Rocha first rose to prominence with his design for the Paulistano Athletic Club Gymnasium in São Paulo, which he completed at the age of 29 after winning a national competition for the construction of the project.

The brutalist stadium has a striking circular form with six concrete fins that jut out and support a circular concrete roof held by 12 tension steel cables.

As he developed his reputation, the Brazilian architect completed a series of private houses including one for himself.

Casa Mendes da Rocha was built alongside a twin house for the architect's sister in Butantā, São Paulo. Both have modular, exposed concrete structures in what became da Rocha's trademark style.

Another private home built from the bulky concrete forms that he became known for is Casa Masetti, a 1970 house designed for the engineer Mário Masetti.

The house sits on eight columns that raise the house above ground level so it is surrounded by the tropical vegetation that grows in the city.

Completed in 1987, this Brazilian chapel is defined by a large cylindrical column that represents Saint Peter's role as a foundation of Christianity.

As with so many of his projects, Mendes da Rocha used concrete slabs to blend the chapel with its natural surroundings.

Internal voids were covered by flat skylights, while Mendes da Rocha maintained much of the nineteenth century's original elements.

Completed in 1998, the Brazilian Sculpture Museum, or MuBE, was completed by Mendes da Rocha after he was selected for the project in the 1980s.

In a rare project outside of Brazil, Mendes da Rocha added a new building to Lisbon's National Coach Museum, which was originally built in 1905 and is one of the city's most visited museums.

Thick slabs of pink and red contrast against grey tones to form a new part of the museum, which houses one of the world's most extensive carriage collections.