Researchers from Chalmers University of Technology in Sweden have claimed a "big breakthrough" in the development of a battery that can function structurally as well as a power source.

The load-bearing batteries are being developed with KTH Royal Institute of Technology for use in aircraft, vehicle and building design.

Structural batteries, which are also known as massless energy storage, aim to significantly reduce the weight of battery-powered vehicles or other objects by incorporating batteries into the structure of the object. By so doing, the need for separate batteries is reduced or potentially even eliminated.

This could result in significant efficiency gains. A lighter electric vehicle, for example, will require less energy to drive if all other things are equal.

In order to be viable, the batteries need to provide both power and structural integrity. According to Chalmers University of Technology, the latest prototype exceeds the energy storage, stiffness and strength of all its previous models.

"The first attempt to make a structural battery was made as early as 2007, but it has so far proven difficult to manufacture batteries with both good electrical and mechanical properties," the university explained.

"But now the development has taken a real step forward, with researchers from Chalmers, in collaboration with KTH Royal Institute of Technology in Stockholm, presenting a structural battery with properties that far exceed anything yet seen, in terms of electrical energy storage, stiffness and strength."

According to the university, the breakthrough has been delivered through the use of carbon fibres as the battery's negative electrode, which stores and releases the lithium ions that create electrical energy.

Ions flow from the negative electrode to the positive electrode, which, in this battery model, is made from aluminium foil coated with lithium iron phosphate.

The electrodes are separated by a fibreglass fabric within an electrolyte matrix that helps with the movement of the ions.

Carbon fibre was chosen as it can function as both a store for chemical energy and a conductor, negating the need for other materials and reducing the overall weight of the battery. It is also extremely strong.

"But here, using carbon fibre, we have succeeded in designing a structural battery with both competitive energy storage capacity and rigidity."

Its stiffness is 25 gigapascals, compared with around 75 gigapascals for aluminium, which the university said means "the structural battery can really compete with many commonly used construction materials". 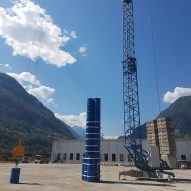 Energy-storing concrete bricks could be key to proliferation of renewables

A project to develop the battery to reach an energy density of 75 watt-hours per kilogram and stiffness of 75 gigapascals is now underway.

Funded by the Swedish National Space Agency, it is hoped to be achieved by replacing the aluminium foil of the positive electrode with more carbon fibre and thinning out the separator.

Model could be used in electric planes

"The next generation structural battery has fantastic potential," said Asp.

"If you look at consumer technology, it could be quite possible within a few years to manufacture smartphones, laptops or electric bicycles that weigh half as much as today and are much more compact," he explained.

"And in the longer term, it is absolutely conceivable that electric cars, electric planes and satellites will be designed with and powered by structural batteries." 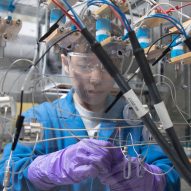 Swiss start-up Energy Vault recently developed an eco-friendly and cost-effective storage solution that relies on moving concrete bricks around. It has more longevity than batteries and more versatility than pumped hydroelectricity.

Photography is by Marcus Folino, courtesy of Chalmers University of Technology.