Architect Javier de las Heras Solé has completed a music school building in the northern Spanish town of Amorebieta-Etxano, featuring a concrete podium and facades clad in weathering-steel mesh that allows partial views of the interior.

According to the architect, the four-storey structure was designed as "an autonomous organism" that lightly touches the cultural centre's northern wall, but is entirely separate in terms of its structure and programme.

The existing external wall is incorporated into the project as a facade that is visible from both outside and inside the music school. This creates a connection between the old and new structures that reflects the site's evolution.

"Once the formal autonomy of the adjacent cultural centre is assumed, we understand that the Musika Eskola will work as an independent element," said the architect, "respecting the orthogonal criteria and abstraction of the facilities but still being a singular and recognisable element."

The music school features a glazed circulation block that spans the gap between the two buildings and is recessed from the facade to accentuate the sense of visual separation.

The void between the buildings allows natural light to reach all four sides of the music school and provides space for a green courtyard that also functions as a drainage area.

The music school's upper three storeys, including a double-height foyer on the first floor, are contained in a rectilinear volume clad in reddish-brown weathering steel.

Large openings are incorporated into the eastern and western facades, while the windows on the southern elevation are covered by screens also made from the perforated metal. 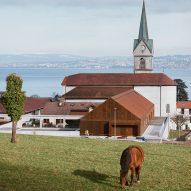 The metal-clad box projects out beyond the building's concrete podium, creating a sheltered outdoor space that protects the entrances and lightens the visual mass of the robust structure.

The music school's load-bearing facade construction allows for open interior spaces that make the most of the compact footprint.

The building contains a reception area and utility spaces on the ground floor, with the main concert room and foyer on the first floor.

The double-height foyer is designed to provide enhanced acoustics so that it can be used as an alternative performance space if needed. A full-height window floods the space with natural light and looks out onto the adjacent park.

Throughout the building, the concrete supporting structure and floor slabs remain visible. The rest of the material palette comprises stone flooring and walls covered with wooden battens to improve the acoustic qualities of the spaces.

De las Heras Solé previously collaborated with fellow architect Bosch Tarrús on the design for a school extension in Girona, featuring perforated metal walls that allow filtered light to reach the rooms inside.