Tokyo studio Key Operation has completed an apartment building in Yokohama covered with thin concrete panels that create a random pattern of light and shadow across the facades.

The 11-storey building contains 94 privately owned studio flats with floor areas ranging between 22 square metres and 47 square metres. The compact units are designed for single occupants or couples without children.

The architects wanted the new building to complement the post-war structures that give the neighbourhood its distinctive character. The robust but open appearance of these low-rise concrete buildings is translated into the facade treatment of the Kannai Blade Residence.

"Our strategy was to emphasise the concrete floor slabs in order to amplify and echo the area's horizontal linearity," said Key Operation. "We also used the paper-thin concrete fins to break the monotony and introduce playfulness."

Vertical concrete panels with a thickness of 40 millimetres are placed randomly across the building's facades to break up the overall visual mass and create a decorative pattern that conceals the distribution of the apartments.

The depth of the panels varies between 200 millimetres and 900 millimetres, with some forming a brise soleil that shields the apartments from direct sunlight in summer, and others functioning as dividing walls between the units.

The panels are made from hybrid prestressed concrete (HPC) that uses carbon cables instead of steel rods to reinforce the material. The mix also contains polypropylene fibres so it can be used to make extremely thin panels that are also very strong.

"When you look at the entire building from the front elevation, these concrete fins appear as sharp as a Samurai's sword cutting through the air," the architects said.

"If you look at the building from the side, however, you can begin to appreciate the texture of the exposed concrete, which changes its appearance with the intensity of the light." 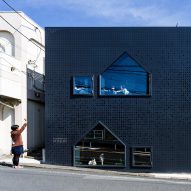 The HPC panels are also used to create a decorative lighting feature in the building's lobby. Acrylic rods cast into the dark concrete replicate the appearance of a night sky when illuminated from behind.

The apartments each have a narrow floor plan with a width of just 2.9 metres. Kitchen and utility areas are incorporated alongside the entrance hallways and sliding doors are used to provide privacy without requiring additional space.

The living areas open onto balconies incorporating concealed escape ladders that are a requirement in many Japanese apartment blocks. The balconies also discreetly accommodate services including boilers and air-conditioning units.

Internally, the apartments feature a minimal palette of wooden floors and surfaces finished in shades of white, black and grey. The balcony ceilings, handrails and external walls are also painted black to complement the grey concrete surfaces.

Key Operation is an architecture and design studio based in Tokyo, founded in 2005 by Akira Koyama. The firm's broad portfolio includes a raw concrete apartment block, a cedar-clad warehouse at a cemetery and private house designed around the clients' pet cat.