Architects Simón Vélez and Stefana Simic have worked with craftspeople from Colombia, Morocco and Italy to create The Majlis, which recreates a traditional Islamic gathering space from bamboo and handwoven textiles.

The structure is installed in the gardens of the Abbazia di San Giorgio Maggiore in Venice for the 2021 edition of the Venice Architecture Biennale.

It aims to bring wider attention to the global importance of majlis, which feature on UNESCO's list of Intangible Cultural Heritage.

In pre-Islamic Arabia, a majlis was a place where people would come together to exchange ideas. They are common among nomadic communities, but could also be a part of the home or a more formal gathering space.

"Although the majlis is a reality for many nomadic people across the world, from the Maghreb to Eastern Asia, the name and the meaning of the majlis is unfamiliar to many," said exhibition curator Thierry Morel, "so I thought it was very important to explain the role of the majlis and what happens there."

Although a majlis can take many forms, this example features a bamboo structure designed and built in Bogotá, Colombia, and textiles handwoven in the Atlas Mountains of Morocco.

Bamboo experts Vélez and Simic, who together lead the studio Gigagrass, used their expertise to design a structure with a domed shaped and projecting roof canopy.

It showcases bamboo's unique combination of strength, lightness and sustainability, which led Vélez to coin the term "vegetable steel" to describe the material.

According to Simic, the craft involved in working with bamboo is one of its most unique characteristics.

It may also explain why bamboo is not more commonly used in construction, despite its numerous advantages. 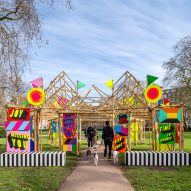 "Bamboo has an obvious advantage in terms of sustainability but for me, the most motivational aspect of bamboo is the relation with the craftsmen," said Simic.

"There's no way to really standardise bamboo, you can reach a certain point but you can't eliminate the craftsmen from any part of the bamboo architecture production."

As the architects weren't able to travel to Venice to install the structure, they collaborated with craftspeople from Venice to assemble the components on-site.

The handwoven textiles that wrap the building's central dome were created by the Ain Leuh Women's Cooperative in Morocco, who have built a community around this craft.

The Majlis was initiated by Caravane Earth, a newly established foundation that aims to promote traditional idea and techniques, as a way to find answers to some of today's problems.

The installation is accompanied by an exhibition showcasing objects and craftsmanship that tell the stories of majlis from around the world.

"The main purpose of The Majlis is to illustrate the importance of intercultural dialogue and mutual education, to demonstrate the power of traditional knowledge and techniques in dealing with the majority of planetary issues of the present," said Caravane Earth managing director Fahad Al-Attiya.

As well as installing the pavilion, Caravne Earth also commissioned landscape architect Todd Longstaffe-Gowan to redesign the gardens where it is set.

Longstaffe-Gowan's design sees the landscape transformed into a productive garden, with vegetables, fruit trees and herbs. Based on how a Venetian garden might have looked in the Middle Ages, it includes an enclosure for chickens, furrow planting and a type of tree used in apothecary.

While the majlis will travel to other destinations after the biennale is over, including Qatar during the 2022 FIFA World Cup, the garden will remain in place for the future.

In this way, the exhibition can have a permanent legacy for the Benedictine community of San Giorgio Maggiore, who are based here.

The Majlis is on show at Abbazia di San Giorgio Maggiore as part of the Venice Architecture Biennale, which takes place from 22 May to 21 November 2021. Dezeen Events Guide for all the latest information you need to know to attend the event, as well as a list of other architecture and design events taking place around the world.