The buildings include a house built in 1999, a conference room erected in 2000 and a pavilion completed in 2001.

"Vélez built his first bamboo houses here in Boisbuchet," said Boisbuchet founder Alexander von Vegesack in a movie Dezeen filmed at the estate last year. "One of them blew away in the storm of 1999-2000 but the other ones became quite well known." 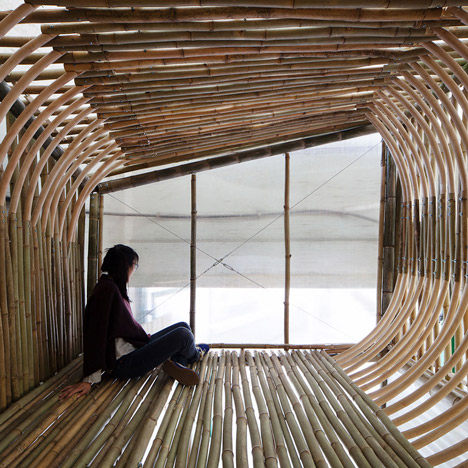 Vélez imported giant "guadua" bamboo canes from his native Colombia for the buildings, since the thinner European-grown plants are not suitable for heavy structural loads.

"While building his pavilions and guest houses at Boisbuchet, Vélez pioneered new ways of using giant bamboo from his native Colombia on an architectural scale," said von Vegesack.

The structures, which were built by attendees of workshops at the estate in south-western France, showcase new ways of using bamboo in architecture, said Boisbuchet director Mathias Schwartz-Clauss.

"The architecture of Simón Vélez is innovative because of the large scale of his projects," Schwartz-Clauss said. "He created and adopted new techniques to connect bamboo and manage structural forces in his designs. He makes an intelligent use of a local material in innovative architectures, refusing to adopt an international standard approach to contemporary architecture."

"He managed to bring attention on a poor material and make it noble, changing the perspective that even Colombian people had in its regards," he added.

Born in 1949, the reclusive Simón Vélez first came to international attention with his pavilion at Expo Hanover 2000 for zero-emissions research organisation ZERI Foundation. The two-storey, circular bamboo building became the most popular pavilion at the Expo.

He first started working with bamboo 30 years ago, when he developed a method of creating strong joints between canes by injecting them with cement. This allowed steel plates and bolts, which would otherwise put too much strain on the canes, to be used.

"I discovered that injecting liquid cement at the points where I wanted to make joints, then inserting steel plates and screws, I could make efficient connection points," Vélez told Dezeen in a rare interview via email.

"From that moment on, bamboo became for me a real 'vegetable steel'. I had discovered a tensile bond strength for bamboo that no one before had achieved."

The Bamboo House at Boisbuchet is a two-storey guesthouse that utilised the technique. Vélez inserted metal connecting rods into the hollow chambers at the end of each bamboo cane, which he filled with concrete. The building later had to be reinforced with steel girders to allow it to be used for guests, since bamboo had not yet been certified as a legal construction material in France.

Built to accommodate 40 people, the Conference Room took the connecting solution a stage further. Vélez used plastic drinks bottles as moulds for the concrete, inserting these into the concrete-filled ends of the canes and in turn inserting steel connectors into the bottles to create simple structural junctions.

The conference room, which sits next to the guest house, was originally open to the elements at the sides but in 2007, interior architect Sevil Peach designed a glazed surround and inserted a kitchen and bathroom.

Vélez's third remaining structure is a low-slung pavilion that sits beside the lake at Boisbuchet and is used as a boathouse. This again uses plastic bottles as moulds for concrete to connect the bamboo canes to the foundations, with splayed beams gathered into four clusters where they meet the ground. To give the roof enough weight to stop it being blown away in storms - the fate of another of Vélez's experiments at the estate - the shingle-covered roof features a layer of concrete poured onto expanded metal mesh.

Each summer the Boisbuchet estate hosts architecture and design workshops such as the Blickfang designworkshop that Dezeen filmed last year.

Dezeen's interviewed Velez as part of a series focusing on architects who are helping to create a new bamboo architecture movement, including Vo Trong Nghia from Vietnam who said the material would be the "green steel" of the 21st century.

Here's a short interview conducted with Vélez about his bamboo architecture:

Marcus Fairs: What is the tradition of using bamboo in Colombia?

Simón Vélez: I was born in Manizales, a region where bamboo is endemic and abundant. It is the main feature of the landscape. It is also the region of Colombia where most coffee is produced. Formerly, both rich and poor built with bamboo but since concrete appeared, only the very poor continue using it. For this has the stigma of poverty.

Marcus Fairs: What are the benefits of using bamboo?

Simón Vélez: Giant bamboo species such as guadua [a large bamboo native to Colombia] are the fastest growing plants in nature. The guadua is a comparatively lazy bamboo: it only grows 12 centimetres per day, whereas some Asian bamboos grow up to one metre per day.

Bamboo is not a tree; it is a giant woody gramineae [true grasses] that also produces wood. It’s an alternative forest product that allows us to avoid exploiting rainforest trees in search of wood. When we cut a bamboo, we are cutting a blade of grass that grows very fast. When we cut a tree you have to wait many years until the new tree is able to be harvested.

Marcus Fairs: When did you first use bamboo as an architectural material?

Simón Vélez: I became interested in guadua thanks to a customer who asked me to make a stable for their horses using this material. I had never worked with it before. This was about 30 years ago. The first thing I had to do was find a construction technique that allowed me to use it as a structural element.

Marcus Fairs: How did you develop your technique for using bamboo structurally?

Simón Vélez: I discovered that injecting liquid cement [into the bamboo] at the points where I wanted to make joints, then inserting steel plates and screws, I could make efficient connection points. From that moment on, bamboo became for me a real “vegetable steel”. I had discovered a tensile bond strength for bamboo that no one before had achieved.

Since bamboo generally has extraordinary tensile strength, I can say from my experience that any type of architectural structure that can be built in steel can also be built with guadua bamboo.