British designer Es Devlin has filled the courtyard of Somerset House with trees for her Forest for Change installation as part of this year's London Design Biennale.

The London Design Biennale opened today after the cancellation of the 2020 edition due to coronavirus. It is one of the first events to physically take place in London since the start of the pandemic.

Devlin, who is this year's London Design Biennale artistic director, described Forest for Change as "a place of transformation."

"My background is a little bit in drama and literature, and those forests in Shakespeare – you go in as one thing, and you come out as another," she said.

The installation is also known as The Global Goals Pavilion and is presented in partnership with Project Everyone, a not-for-profit agency founded by Richard Curtis, Kate Garvey and Gail Gallie that aims to further awareness of the United Nations' initiative Global Goals.

Officially known as the UN's Sustainable Development Goals (SDG), the Global Goals are 17 objectives that aim to provide a better world by 2030.

Visitors to the forest can explore the 17 goals at the centre of the clearing, where they are showcased through quotes and facts on colourful mirrored pillars.

"The idea with this particular forest is that as you travel through it you reach a clearing and that clearing is full of a statement of the UN Sustainable Development Goals," Devlin said.

The simple, graphic design and bright colours make the pillars stand out against their verdant surroundings.

"These goals are complex problems, but when you see them in those colours with those simple symbols, they feel less overwhelming," Devlin said.

"And it's my hope that when you get to the centre, you're able to approach these really complex global problems without feeling so daunted or overwhelmed."

According to Devlin, the idea of presenting the pillars within a forest came about two years ago when Devlin was taken on a tour around the building and told what she could and couldn't do with the space.

"Jonathan Reekie [director of Somerset House Trust] showed me this courtyard and said 'there's only one thing you can't do here and that is plant trees'," Devlin said.

"It's been written into the architectural covenant of the building, based on the Palladian Enlightenment principles of the triumph of human design over nature, that you can't put any living trees in this courtyard."

Twenty-three species of trees that are commonly found in the UK and northern Europe make up the forest itself, which sits in planters surrounded by shrubs.

"We have tried hard to create as biodiverse a forest as possible within the realms of what is possible during this pandemic and we are delighted with where we have ended up," said landscape designer Philip Jaffa, who worked with Devlin on the project.

Visitors to the Forest for Change installation are invited to record their own short message about what change they want to see to help fulfil a global goal. The message will be added to a music installation that's playing in the clearing.

Birdsong part of the installation

In addition, musician Brian Eno has curated a collection of birdsongs that play throughout the forest and features birds from all over the world, recorded over a 24-hour period. The playback has been timed to match the time in the birds' natural habitat.

"The birds you hear are singing when they would sing from all over the world," Richard Curtis said.

According to London Design Biennale, Forest for Change will be carbon positive, as the trees will eventually be donated to London boroughs and planted out as part of tree-planting initiative The Queen's Green Canopy.

This means they will offset the installation's carbon footprint three times over after the Biennale, organisers said. 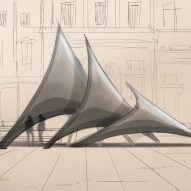 Visitors to the biennale, which takes place in London from 1 to 27 June, will also be able to see designer Ini Archibong's Pavilion of the African Diaspora, which was first announced on Dezeen last year in a live interview.

Twenty-nine countries, regions and groups of people are represented at this year's London Design Biennale, which is also showing four special projects from designers including Beatie Wolfe.